Home > Our Lady of the Angels Chapel  > The Relics > St. Vincent de Paul 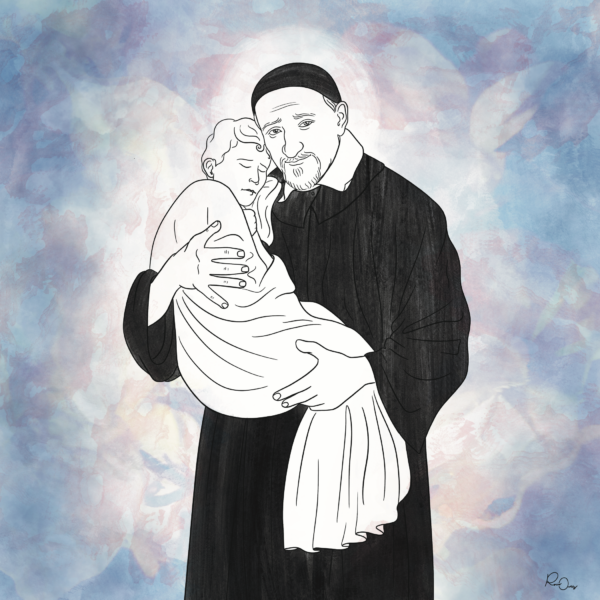 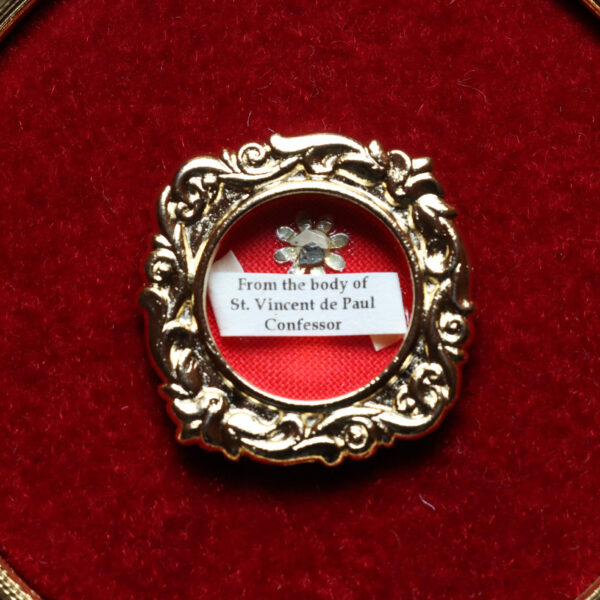 “The most powerful weapon to conquer the devil is humility. For, as he does not know at all how to employ it, neither does he know how to defend himself from it.”

Saint Vincent de Paul had a clear-cut plan for how his life would play out – becoming a priest at the age of just 19, he was perfectly content with attaining a prestigious office in the Church, earning copious amounts of money in order to retire early, and then return to his family in their home village in the south of France.

What he probably didn’t expect though, was to be captured at sea by pirates, sold into slavery, escape a few years later, found a religious order and charity organizations, and become known as “The Apostle of Charity” from his dedication to caring for the poor.

While his life didn’t play out the way he anticipated, Vincent de Paul served God faithfully, and allowed the Holy Spirit to work in his heart, change his aspirations, and direct his efforts to those that were most in need.

Born on April 24, 1581, Vincent was the third child born to peasant farmers living in the French village of Pouy. His first formal education was by a group of Franciscan priests, and he displayed a profound talent for literacy early in his life, and at the age of 15, his father paid for him to enter a seminary by selling the family’s oxen.

He attended a seminary in Dax, France and was ordained a priest on September 23, 1600. This was cause for some controversy though, due to the Council of Trent regulations that required men be at least 24 years old prior to ordination. Vincent was appointed a parish priest, but when his age came into question of violating the regulations, he decided to resign from the position, rather than fight the issue. He would go on to continue his studies at the University of Toulouse, where he received a Bachelor of Theology degree.

Early biographies of Vincent de Paul tell of him receiving a piece of property in an inheritance from a wealthy patron he had met in Toulouse. In 1605, he was sailing to sell the property, when his ship was captured by Turkish pirates. Vincent was taken to Tunis and sold into slavery.

Vincent spent two years in slavery, during which he was sold multiple times, eventually ending up with a former priest who had converted to Islam in order to gain his own freedom from slavery, and had Vincent attending to him and his three wives. One of his wives though would visit Vincent while he was in the fields and ask questions about his faith. Vincent was so genuine and passionate about his Catholic faith, the wife in turn began admonishing her husband for renouncing his Christianity.

Vincent’s master was so filled with remorse, that he decided to not only set Vincent free, but to escape back to France with him. They crossed the Mediterranean in June of 1607, and Vincent de Paul was a free man.

After returning to France, Vincent traveled to Rome for a year to briefly continue his studies, before moving to Paris, where he remained permanently. Not long after arriving in Paris, he made two acquaintances that would drastically alter his initial plans for wealth and early retirement.

Pierre de Bérulle was a well-known French priest who would go on to become a cardinal and become Vincent’s spiritual director. Father André Duval was a French priest and a professor of the Sorbonne, one of the first established universities in the world. Both would have heavy influences on Vincent, with Cardinal Pierre appointing Vincent as the pastor of Saint-Medard in the town of Clichy, and Fr. Duval introducing Vincent to the “Rule of Perfection” by Benet Canfield, a book focused on mysticism and the spiritual life that he would quote regularly later in life.

Vincent continued to grow in his faith while serving in Clichy, and his commitment to prayer and the priesthood helped deter him from continuing to pursue wealth and leisure. The most significant conversion of heart happened in 1617, when Vincent was recalled back to Paris less than a year after leaving, having been appointed chaplain to the Gondi family by Cardinal Pierre. The Gondi family were a prominent Florentine banking family who had an estate in Picardy. It was there, in January of 1617, that Vincent heard the confession of a dying servant, which would open his eyes to the drastic spiritual and financial needs of the poor in France.

Later that year, Vincent left the Gondi family and was made the pastor of a parish in Châtillon-les-Dombes, a town in the southeast of France. Stories tell of Vincent preparing for a Sunday Mass when a parishioner arrived with news of the illness and financial struggles of a family in the parish. Vincent preached on their need that afternoon, and his parishioners responded with an overwhelming wave of support, bringing the family much-needed food, supplies, and generosity. He would go on to organize a group of affluent women in the area who helped collect funds for missionary projects, relief for victims of war, the foundation of hospitals, and even the ransom of 1,200 slaves to safety from North Africa. This group would become the first Confraternity of Charity, the Daughters of Charity of Saint Vincent de Paul.

Madame Gondi, having seen firsthand Vincent’s faith in action (the dying servant Vincent attended to had told her his soul “would have been damned without Vincent’s ministry”), noticed Vincent’s local missions to the people, and began setting aside money to preach about missions on a greater scale. She, along with Fr. Duval, encouraged him to find a community that was willing and able to help Vincent spread the word about missions and serving the poor, but none were willing to take on this specific apostolate. So, with the mentorship of Fr. Duval, in April of 1625 he founded the Congregation of the Mission, a group of priests also known as “Vincentians” who were committed to lives of chastity, poverty, obedience, and devotion to the poor.

This religious order sparked another passionate purpose for Vincent – the training and formation of priests. At the time, there were not many priests in France, and those that were present were not particularly faithful to their way of life. Vincent began conducting numerous retreats to help instruct and prepare men for the priesthood, which would serve as a precursor for the model of modern-day seminaries. Vincent was a pioneer in clerical training and at one point, the Vincentians were directing more than 50 different seminaries around the world.

As the Congregation of the Mission continued to grow, so did the Confraternities of Charity. More and more laywomen were visiting, feeding, and caring for the sick and poor. With Louise de Marillac, who Vincent served as her spiritual advisor, they formed the Daughters of Charity in 1633, the first non-cloistered religious institute of women devoted to charitable works. They cared for prisoners, taught catechism to rural children, and took to the city streets to serve God through the poor.

Vincent continued to oversee these various organizations for many years, while also serving as the spiritual director at the Convent of St. Mary of the Angels for 28 years. He served on the Queen’s Council for Ecclesiastical Affairs, combatted the rise of the Jansenism heresy, and served faithfully all the way up until his death on September 27, 1660. He was 79 years old.

Two miracles were attributed to the work of Vincent de Paul, a nun cured of ulcers, and a laywoman who was healed of paralysis. Subsequently, Pope Benedict XIII beatified Vincent on August 13, 1729. Less than a decade later, Pope Clement XIII officially canonized him on June 16, 1737. He is the patron saint of charities, hospitals, volunteers, prisoners, and horses.

Vincent’s legacy lives on throughout the world from his passionate charity. There are more than 4,000 Vincentians still serving in 86 countries, and more than 18,000 Daughters of Charity spread out across 94 countries. In 1833, the Society of St. Vincent de Paul was founded by Blessed Antoine Frédéric Ozanam, a French historian, scholar and lawyer, to serve the poor.

Saint Vincent de Paul’s compassion, humility and generosity changed the world. He didn’t necessarily have grandiose plans to cover the globe with his image, teachings or writings; instead, he served those in need who were right in front of him. Once he did that, God did the rest, and the “Father of the Poor” changed the world through the training of priests in the French church, the service of the faithful Vincentians and Daughters of Charity, and the actions of every person who reads about the life of this great saint and commits themselves to doing their part to serve the poor too. 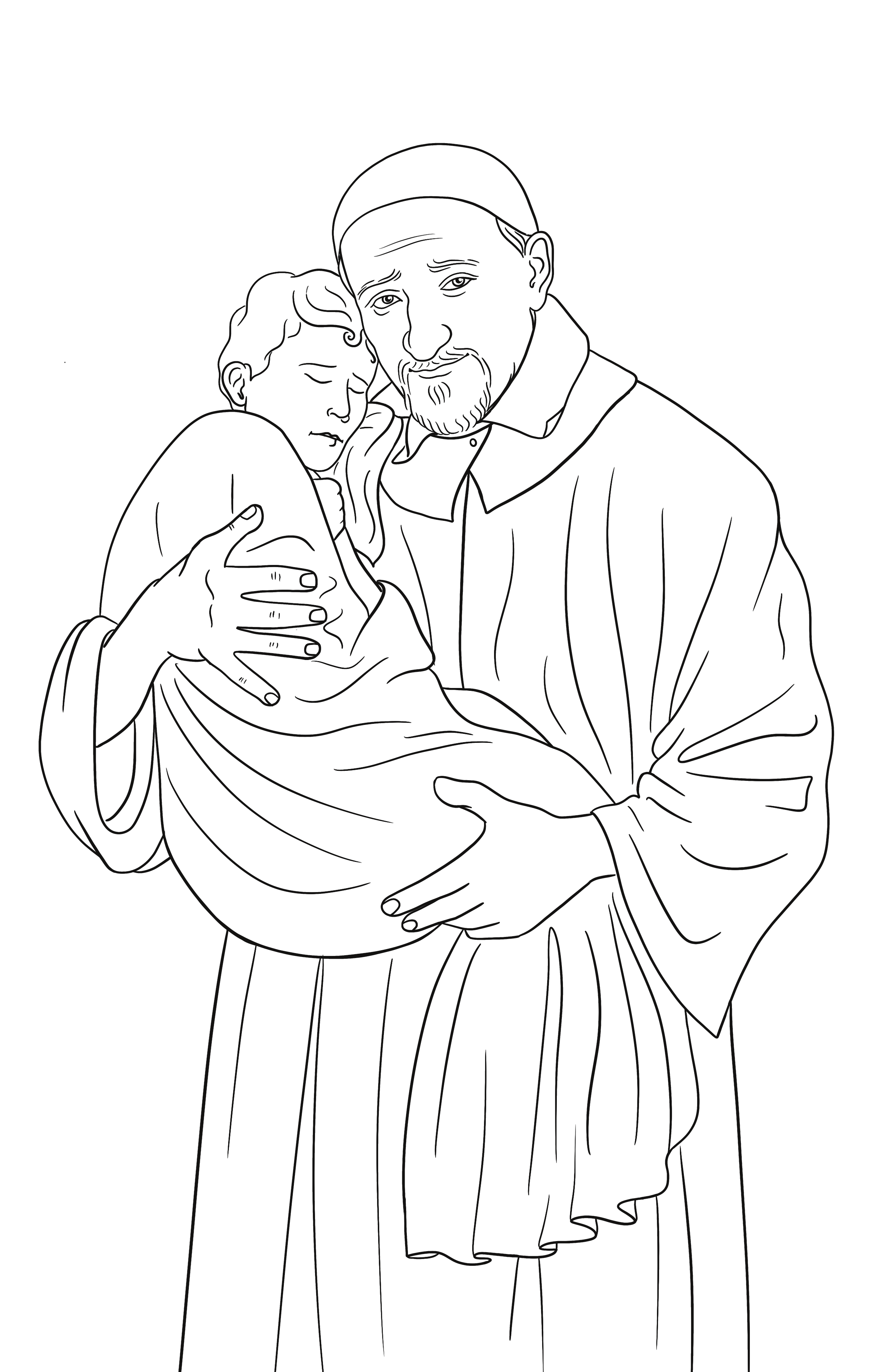 BIRTHPLACE: POUY, A SMALL TOWN IN THE PROVINCE OF GUYENNE AND GASCONY, THE KINGDOM OF FRANCE.

FUN FACT: ST. VINCENT’S BONES AND HEART ARE INCORRUPTIBLE! HIS INCORRUPT HEART CAN BE FOUND IN THE CONVENT OF THE SISTERS OF CHARITY, AND HIS BONES HAVE BEEN PLACED INSIDE A WAX FIGURE OF HIS BODY. HIS RELICS CAN BE SEEN IN THE CHURCH OF ST. VINCENT DE PAUL IN PARIS.