Home > Our Lady of the Angels Chapel  > The Relics > St. Thomas Aquinas 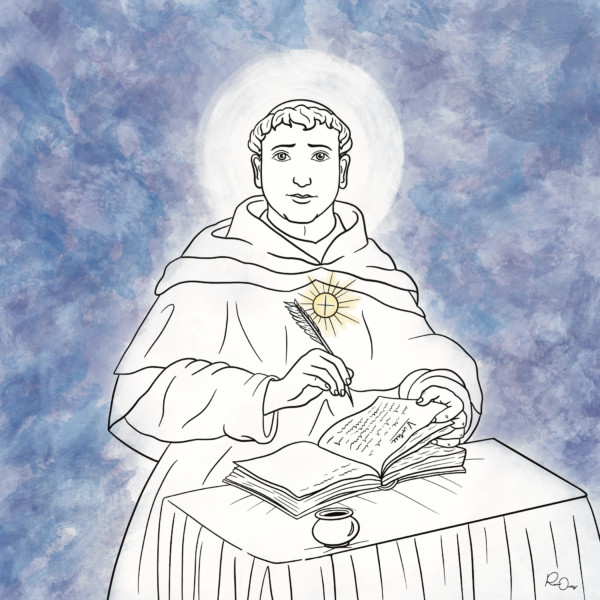 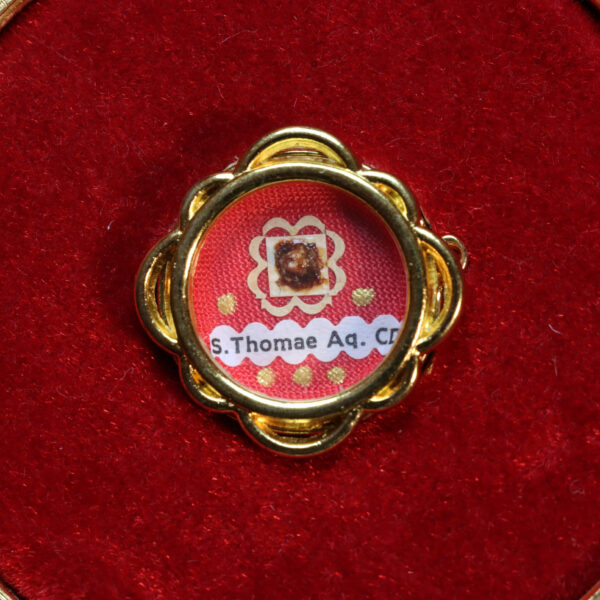 “I would rather feel compassion than know the meaning of it. I would hope to act with compassion without thinking of personal gain.”

Saint Thomas Aquinas was an invaluable gift to both the Catholic Church and to the world for his ability to bridge the gap between faith and reason. A 13th century Dominican friar, he is recognized today as the most significant figure in scholastic theology, and an unparalleled voice on biblical interpretations during the Middle Ages.

Thomas Aquinas was born in 1225, inside a castle owned by his parents, Count Landulf of Aquino and Theodora, the Countess of Teano. The family, with Thomas being the youngest child among his eight siblings, were descendant of Emperors Frederick I and Henry VI, though they were generally regarded as lower nobility in the Kingdom of Sicily.

At the age of five, Thomas was sent to study among Benedictine monks at the Abbey of Monte Cassino. He was regarded as a “witty child” who was often quizzical and curious, posing questions to the monks such as “What is God?” to the surprised monks.

Eventually the military conflict between the Emperor Frederick II and Pope Gregory IX reached the abbey in 1239, forcing 13-year-old Thomas to return to Naples. While studying at the University of Naples, he was attracted to the work of Aristotle and became greatly intrigued by philosophy. He also took interest in the newly founded Dominican order of friars, thanks to meeting John of St. Julian, a Dominican preacher who was part of an active effort to recruit more followers to their order.

Thomas was attracted to their emphasis on academic learning, poverty, purity, and a life of spiritual service, and at the age of 19, he secretly joined the order of Dominican monks.

When his family found out, they were outraged with his decision. His parents demanded that Thomas become a Benedictine instead, in order to enjoy a more affluent and influential position in the church; they couldn’t stand to imagine their son begging as a poor monk.

The Dominicans attempted to prevent his parents from interfering with his decision and arranged to move him to Rome, but on their way to Rome, he was kidnapped by his own brothers and returned to his family’s castle, San Giovanni at Rocca Secca.

His family tried desperately for an entire year to sway Thomas from his new beliefs as he was held captive, but instead he passed the time by tutoring his younger sisters and secretly communicating with the Dominicans. His family even went so far as to offer him a position as Archbishop of Naples and hire a prostitute to attempt to break his resolve. He resolutely rejected both, and legend tells of Thomas chasing the prostitute out of his room with a flaming iron, branding a cross into his door, and then seeing two angels appear in a dream to strengthen his resolve to remain celibate.

When his mother realized their attempts were futile, Theodora arranged for him to escape through a window. So prideful was their family that they preferred a secret escape rather than appearing to accept his position at the sake of their family name.

After his escape around the year 1245, Thomas returned to Naples, where he resumed his studies with the Dominicans. He began studying theology at the University of Paris – the leading center for academic studies in Europe at the time – and likely fell under the wing of another future saint, Albert the Great. Albert was by far the best theological teacher Thomas could have met, and when he was sent to teach at a new university in Cologne in 1248, Thomas would follow the theologian, declining the offer of Pope Innocent IV to become the abbot of Monte Cassino.

Thomas was appointed magister studentium of the university by Saint Albert, but many were confused by the quiet, introverted friar with lopsided eyes, and he gained the nickname “the dumb ox.” Nonetheless, after reading Thomas’ thesis and finding it brilliant, Saint Albert proclaimed to the university, “We call this young man a dumb ox, but his bellowing in doctrine will one day resound throughout the world!”

The next years of his life would find Thomas spending his time teaching and writing across Europe. He taught in Cologne as an apprentice professor, wrote commentaries on the books of Isaiah, Jeremiah and Lamentations, and rapidly gained prominence through his public speaking and preaching.

At the time in Medieval thought, many were struggling to reconcile the relationship between faith and reason. Many great minds of Christianity and brilliant philosophers were present, but few sought to harmonize the two prior to Thomas Aquinas.

Averroes, a Muslim Andalusian who wrote many books on philosophy and theology, had created a popular “theory of the double truth” at the time, which viewed the two types of knowledge, faith and reason, as being in direct opposition of each other.

Thomas preached a revolutionary new focus on the theological aspects of faith and the philosophical principles of reason not as contradicting opposites, but instead as complementary fountains of knowledge that both flowed from God alone. Not only were the two compatible, according to Thomas, but he believed that “revelation could guide reason and prevent it from making mistakes, while reason could clarify and demystify faith.”

To expand on the many teachings and defenses of faith that Thomas provided would require hours upon hours of explanation, but at its core, Thomas combined traditional principles of theology with modern philosophic thought to bring clarity and truth to the world, answering the questions of church authorities, medieval intellectuals, and common people alike.

Thomas would later go on to receive a master’s degree in theology, and teach in Paris, Ostia, Bologna, Rome, Naples, and more. He would write more than 60 books, ranging from topics such as apologetics, philosophy, and Biblical commentaries.

He was appointed regent master in theology at Paris in 1256, served as general preacher of Naples in 1260, and in 1261 traveled to Orvieto, where he worked to form friars who were unable to attend a university, while also producing works for Pope Urban IV, such as writing a newly created liturgy for the feast of Corpus Christi. In February of 1265, Thomas was called to Rome by the newly elected Pope Clement IV to serve as papal theologian. The same year, he began teaching deep theology courses at a newly established Dominican school at Santa Sabina, one of the first advanced schools for the province.

It was while teaching at Santa Sabina that Thomas began his most famous work, the Summa Theologica, a timeless book on Christian doctrine that is also a highly practical guide for spiritual leaders. While it eventually would remain unfinished by Aquinas, to this day it is regarded as one of the most influential works of Western literature.

In 1268, Thomas was called again to serve as regent master at the University of Paris, partly due to a sudden rise of “Averroism”, a resurgence of a “radical Aristotelianism” that opposed the combability of faith and reason. Thomas ended up penning two works which combatted these beliefs and reprimanded Averroism as being “incompatible with Christian doctrine.” The Catholic church would publicly condemn the works of Averroes in 1270 and later in 1277.

At the end of his regency in Paris, the Dominicans requested Thomas to establish a university at the place of his choosing. He chose Naples for the new institution and moved there upon its founding to serve as regent master. He continued to write and preach in Naples, until two mystical experiences would change everything for Thomas.

In 1273, during the Feast of St. Nicholas, Thomas Aquinas had a mystical vision at Mass where he heard the voice of Christ speak to him saying, “You have written well of me, Thomas. What reward would you have for your labor?”

Thomas replied, “Nothing but you, Lord.”

Stories tell of Thomas being found by a sacristan crying and levitating in front of an icon of the crucified Christ while praying, and following this mystical experience, Aquinas found himself unable to continue his writings, saying, “I can do no more. Such secrets have been revealed to me that all I have written now appears to be of little value.”

After his confessor, Father Reginald of Piperno, urged him to continue writing, he refused, admitting that “all that I have written seems like straw to me.” He would never write again.

In 1274, Thomas Aquinas was invited to participate in the Second Council of Lyons to help bridge the gap between Eastern and Western churches, which was rapidly widening at the time. While on his way to the council, Thomas hit his head on the branch of a fallen tree and became ill. He was ushered to Monte Cassino to rest, but after attempting to set out again, he was unable to continue and stopped at the Cistercian abbey in Fossanova, Italy. The monks there offered Thomas a spot inside the castle, but sensing his death was near, he requested to remain in the monastery saying, “If the Lord wishes to take me away, it is better that I be found in a religious house than in the dwelling of a layperson.”

His health continued to dwindle for several days before receiving his last rites and praying “”I have written and taught much about this very holy Body, and about the other sacraments in the faith of Christ, and about the Holy Roman Church, to whose correction I expose and submit everything I have written.”

He died on March 7, 1274, while giving commentary on the Song of Songs.

Before half a century had passed, Thomas Aquinas was canonized a saint by Pope John XXII. In 1567, Pope Pius V named him a Doctor of the Church. In the 16th century, the University of Paris was renamed the College of Saint Thomas. In the 19th century, Pope Leo XIII declared the works of Aquinas were to be taught at all Catholic seminaries and theological institutions around the world.

His original feast day was March 7, the day of his death, but due to that date often falling within Lent, it was moved to January 28th after a revision of the Roman Calendar in 1969. Saint Thomas Aquinas is the patron saint of academics, philosophers, students, publishers, and pencilmakers.

“The Universal Teacher”, Saint Thomas Aquinas illuminated a compatibility of faith and reason and serves as a towering example of what it means to be a devout believer in Jesus Christ. His timeless works are still benefitting the church and the world to this day, and his relentless pursuit of knowledge and holiness, despite any opposition or degradation he faced, should inspire us all to use our gifts for the glory of God. 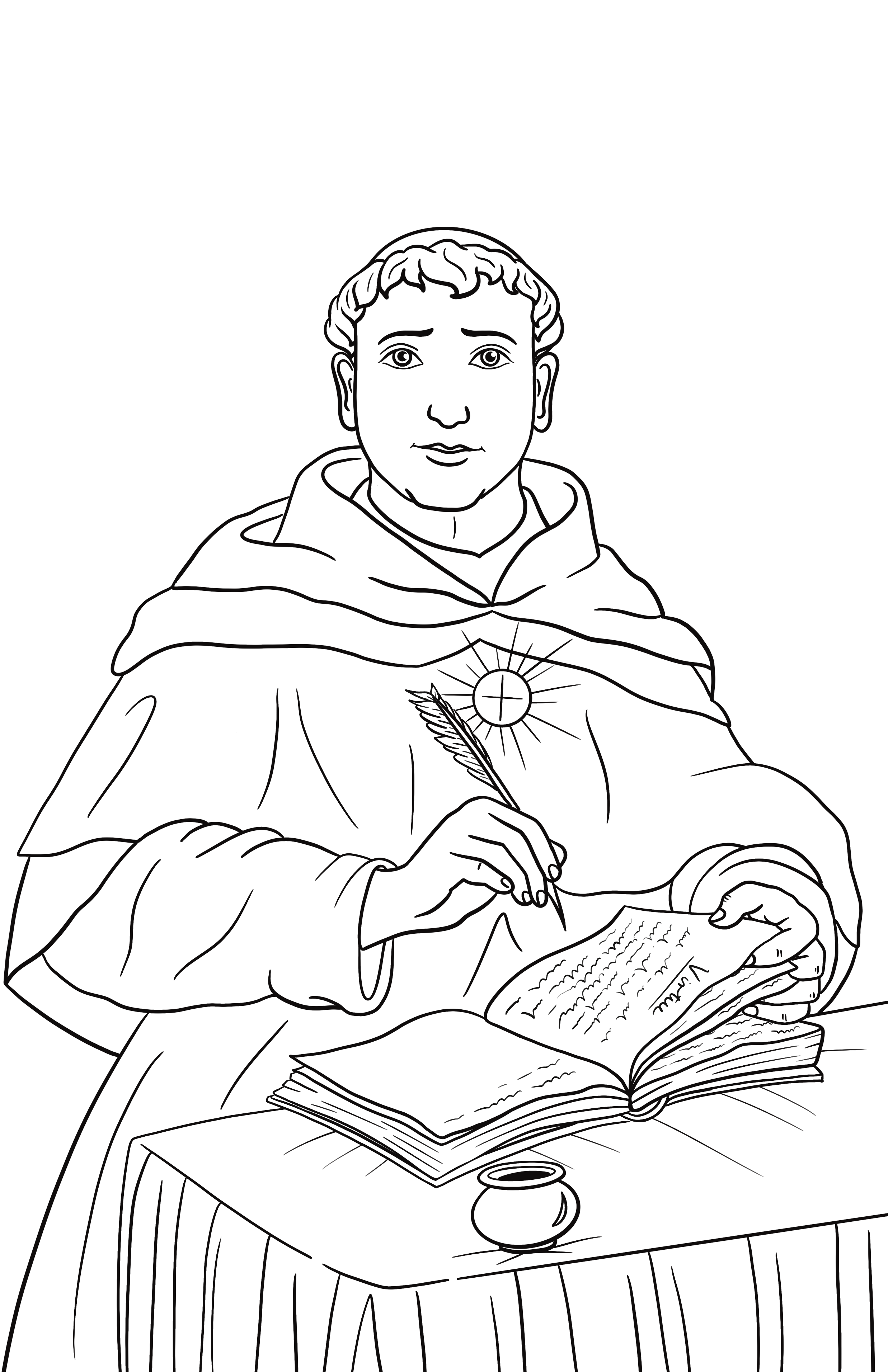 BIRTHPLACE: CASTLE OF ROCCASECCA, NEAR AQUINO

FUN FACT: THE HANDWRITING OF SAINT THOMAS AQUINAS WAS SO BAD, THAT IT HAS BEEN CALLED ‘LITTERA ININTELLIGIBILIS” WHICH TRANSLATES TO “INDECIPHERABLE SCRIPT”