Home > Our Lady of the Angels Chapel  > The Relics > St. Thérèse of Lisieux 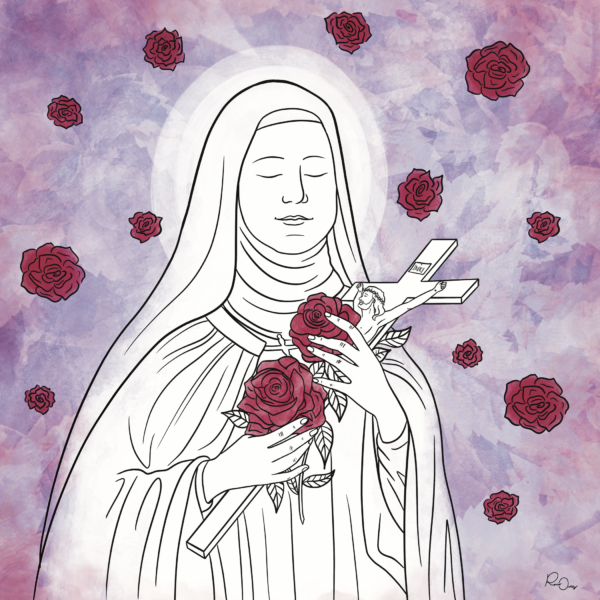 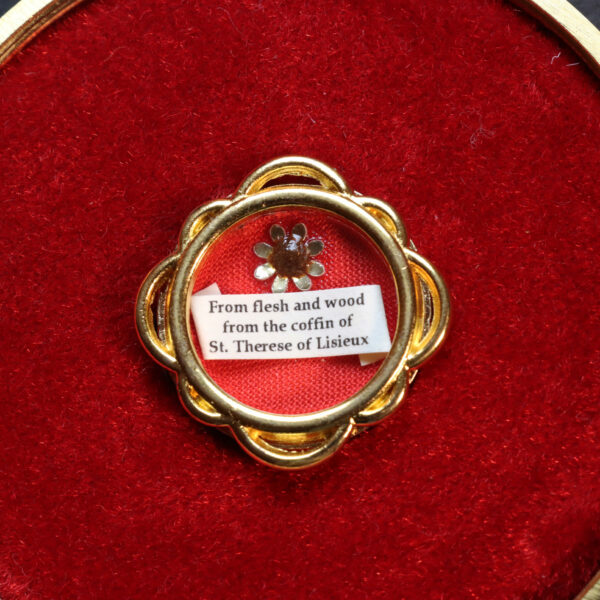 “Without love, deeds, even the most brilliant, count as nothing.”

About Saint Therese of Lisieux

You would be hard-pressed to find another saint in the Catholic Church who has garnered the same amount of admiration and devotion as Saint Thérèse of Lisieux. She’s one of the most popular saints, inspiring generations of Catholics, despite never going on missions, never founding a religious order, writing only one main body of work, and living just 24 years on Earth. But it is the piety, the quiet self-sacrifice, and the love of simplicity that draws Catholics towards the Little Flower, Saint Thérèse of Lisieux.

Thérèse Martin was born in Alencon France in 1873. Her father, Louis, was a watchmaker and jeweler, and her mother Zelie Guerin, worked as a lacemaker. She was the youngest of nine children, but four of her siblings would die at a young age. Both of her parents had previous desires to enter religious life, and even after they were married they decided that they would remain celibate, until a confession revealed their celibacy to a priest who insisted they pursue a marriage as God intended.

All five of Louis & Zelie’s daughters would go on to enter the convent, but Thérèse was less than saintly for most of her childhood. Adored and coddled by her family, she would in turn become needy and insecure at a young age. Furthermore, her mother Zelie would die from breast cancer while Thérèse was only 4, and having to witness her mother’s slow, painful decline greatly saddened the poor little girl.

With all the circumstances and being the youngest of the family, Thérèse quickly became demanding and expectant to have her way no matter what. Her father’s nickname for her was ‘petite reine’, or ‘little queen’.

At the age of 11, she became so ill with a fever, that many thought she wouldn’t make it. Family and friends would gather around her bed, desperately praying for her healing. Her sisters would pray to a statue of the Virgin Mary, which they placed in her bedroom. One day, as Thérèse stared at the statue and prayed, she saw the statue of Mary smile at her. She instantly began to feel better, and she recovered so dramatically that many were curious about her healing. Word of the healing grace of Mary spread, but when pestered with questions about the details regarding Mary, Thérèse refused to answer due to the intimacy with Mary she felt in the healing, so many assumed she had just made everything up.

Following her sickness, Thérèse still remained self-centered and controlled by her emotions. As more sisters left for the convent, soon it was only her, her father, and one other sister, Celine. A moment of clarity at the age of 14 would help usher her out of her egocentric nature and begin her road to sanctity.

Louis and his two daughters were nearing Christmas, and the Christmas day ritual of filling children’s shoes with presents. Though Thérèse was already a teenager, her sister Celine was unable to let her fully grow out of these childhood traditions, and she filled Thérèse’s shoes with gifts. When they arrived back from the church on Christmas day, Thérèse and Celine found their father looking down at the shoes, and before he noticed the two girls, they overheard him sigh and say, “‘Thank goodness that’s the last time we shall have this kind of thing!”

Celine looked over to her sister, fully expecting tears and a temper tantrum to follow, but instead, it was a moment of serene clarity for the future saint. Thérèse immediately noticed her immaturity and childish ways, and thanks to Jesus entering her heart in that moment, she swallowed her tears, walked to the shoes and exclaimed in authentic joy over the gifts. It was a true conversion of heart, and Thérèse would enter the convent the very next year.

She desired to enter Carmel as a contemplative nun, but she was deemed too young to enter the convent. She appealed to the Mother Superior, who told the 15-year-old Thérèse that she could enter early – at the age of 16. Not satisfied, she appealed to the Bishop. When that didn’t work, she took a pilgrimage to Rome and appealed directly to the Pope himself! While at an audience with the Pope, despite being forbidden to speak to him, she began begging that he let her enter the Carmelite convent as soon as he was near enough to hear her.

While the Pope didn’t intervene, the Vicar General was impressed by her zeal, and Thérèse Martin was admitted to the Carmelite Convent at Lisieux on 9 April 1888. A once shy little girl, the pursuit of an early entrance to the convent was the first beginnings of blooming into the Little Flower.

Entering the convent, she took the name Sister Thérèse of the Child Jesus and the Holy Face. Her sisters Pauline and Marie were in the same convent, but unlike her spoiled childhood, the life of routine and silent prayer was tough. On top of that, not long after she entered the convent, her father began hallucinating after a series of strokes left him stricken both physically and mentally. As a cloistered nun, she was unable to visit her beloved father, and this grief began a period of suffering and dryness of prayer for the distraught Sister Thérèse. She would try desperately to pray but write in her journals that “Jesus wasn’t doing much to keep the conversation going.”

Thérèse persevered through this spiritual drought through one main focus: humility. Sitting in the convent, she knew that she may not be able to serve as a world-changer in the traditional sense of great works and deeds, but instead, she focused on the little sacrifices.

She would write “Love proves itself by deeds, so how am I to show my love? Great deeds are forbidden me. The only way I can prove my love is by scattering flowers and these flowers are every little sacrifice, every glance and word, and the doing of the least actions for love.” These ‘little sacrifices’ would range from being friendly to nuns she disliked, to not complaining about anything trivial, to even being accused of breaking a vase she hadn’t touched, and instead of proclaiming her innocence, she apologized and asked for forgiveness. This mindset would develop into an keen spirituality, based on childlike trust and confidence in God. The ‘little way’ of Thérèse was not about grandiose actions or words; it was about doing simple things well, and with extraordinary love.

Another sacrifice for Thérèse would soon follow – her sister Pauline was elected prioress of the convent, and due to the politics of the order, many nuns feared the Martin sisters would ‘take over’ a rule on the convent. To alleviate those fears, Pauline asked Thérèse to remain a novice. This was no small request, as this would mean Thérèse would never become a fully professed nun in the order, continuing to have to ask permission for nearly everything. For Thérèse though, it was another sacrifice that she could offer up for the glory of God.

As Thérèse continued her time in the convent, she reflected constantly on her ability to achieve holiness in life. For her, sainthood was the only option, even with the simple, hidden life she was living. She wrestled with her vocation, was placed in charge of the other novices, and even reflected on how she measured up to the saints in terms of her likelihood for sainthood.

“I have always wanted to become a saint. Unfortunately, when I have compared myself with the saints, I have always found that there is the same difference between the saints and me as there is between a mountain whose summit is lost in the clouds and a humble grain of sand trodden underfoot by passers-by. Instead of being discouraged, I told myself: God would not make me wish for something impossible and so, in spite of my littleness, I can aim at being a saint. It is impossible for me to grow bigger, so I put up with myself as I am, with all my countless faults. But I will look for some means of going to heaven by a little way which is very short and very straight, a little way that is quite new.”

She would continue to pursue her apostolic and missionary vocation, to love and draw everyone in her path closer to the Lord, even as her health began to fail her. In 1896, she coughed up blood, but kept working without telling another soul, until she became so sick that it was apparent. She experienced months of pain and agony, and her sister Pauline could only watch and pray at her bedside, before asking Thérèse to write about her life in hopes of distracting her. She penned her reflections on her childhood, her love of God, and her “everything is grace” mindset over the course of her final weeks, before finally succumbing to tuberculosis on September 30, 1897. She was 24.

Before she died, realizing that her mission was only beginning, Thérèse proclaimed “I will spend my heaven doing good on Earth. I will let fall a shower of roses.” And while despite one nun at the convent commenting that there was “nothing to say” about Thérèse following her death, Pauline disagreed. She compiled the final writings of Thérèse, which would become her autobiography, “Story of a Soul.”

Pauline sent the autobiography to 2,000 convents, and before long, her sister’s words had stirred up a passion for her “little way” of faith. The faith in Jesus and embracing of daily sacrifices that Thérèse had welcomed spoke to the hearts of nuns across the world. Her ‘shower of roses’ soon became a torrent, that still drenches the hearts of many Catholics to this day.

Thérèse of Lisieux was canonized on May 17, 1925 by Pope Pius XI, only 28 years after her death. In October of 1997, Pope John Paul II declared her a Doctor of the Church, the youngest ever in the Catholic Church, thanks to the impact of her profound spirituality on so many faithful Catholics. She Is the patron saint of missionaries, florists and gardeners, the loss of parents, tuberculosis, and the gardens of the Vatican City.

Saint Thérèse of Lisieux taught us that we should never stop seeking holiness, even in the midst of ordinary lives. To feel as though we can do nothing is false, and a lure of the enemy aimed to keep us content with mediocrity, or a lukewarm faith. Instead, let us look to this inspiring Carmelite nun, who trusted in God enough to seek every available sacrifice she could endure, no matter how big or small. Pursuing this ‘little way’ of faith, may we too journey on towards heaven, picking up our crosses on the way, one shard of wood, one sacrifice, at a time. 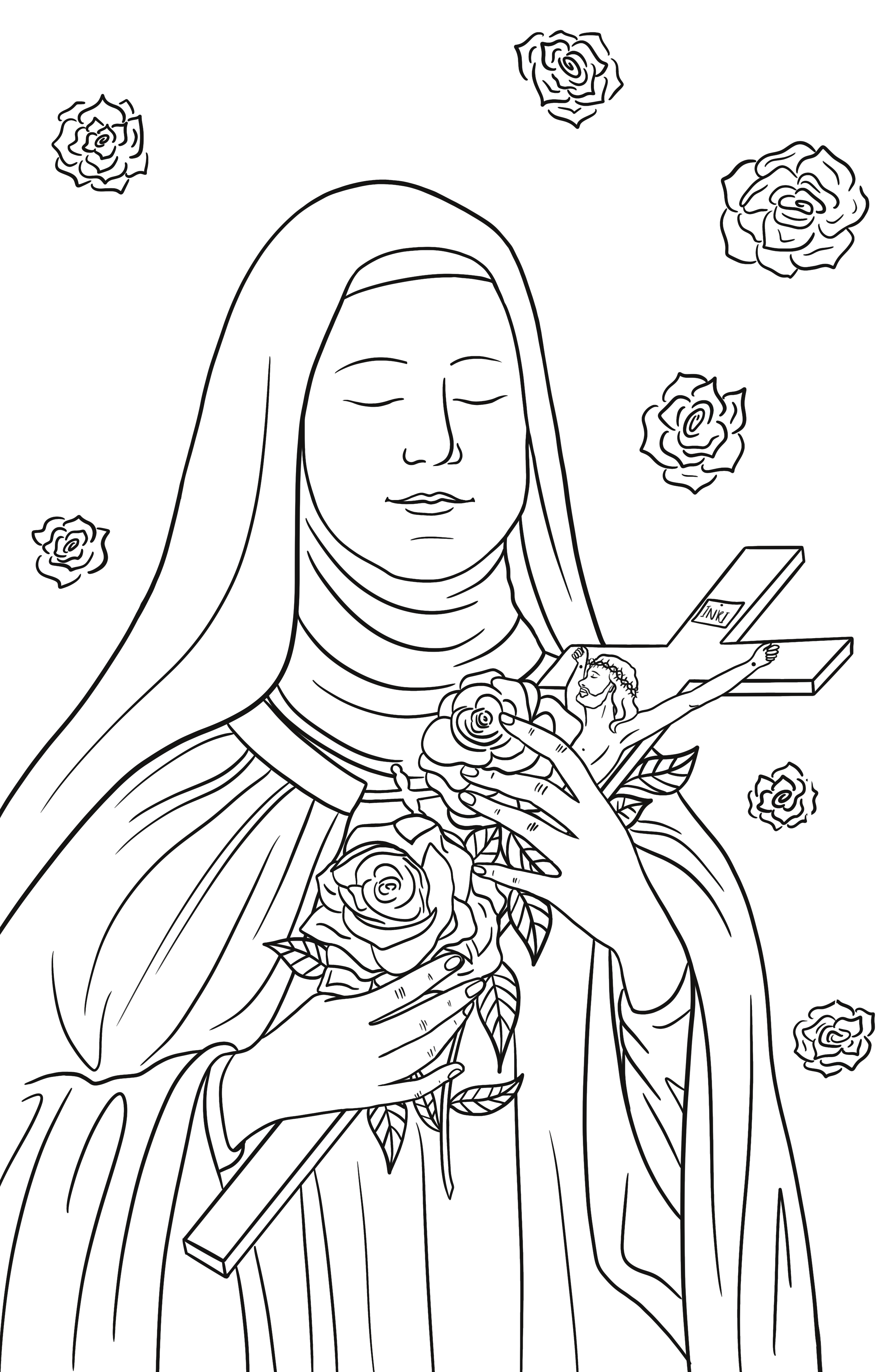 FUN FACT: OUR VERY FIRST RELIC REVEAL, SAINT TERESA OF CALCUTTA, WAS INSPIRED BY THÉRÈSE OF LISIEUX WHEN ENTERING RELIGIOUS LIFE, AND CHOSE HER NAME IN ORDER TO HONOR HER!