Home > Our Lady of the Angels Chapel  > The Relics > St. Jude 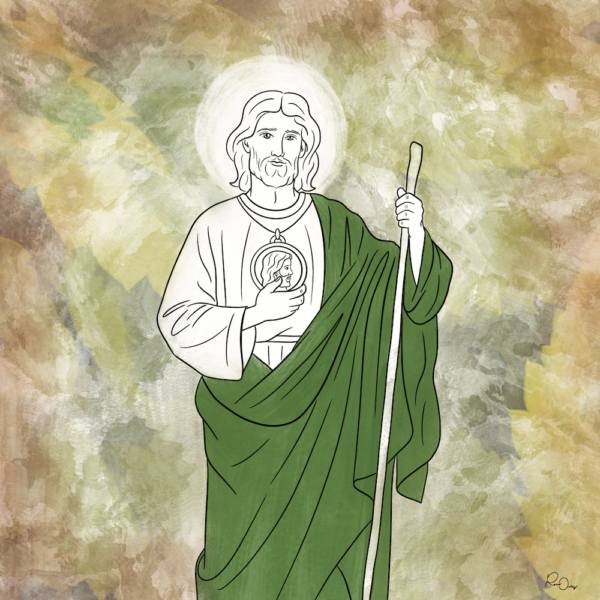 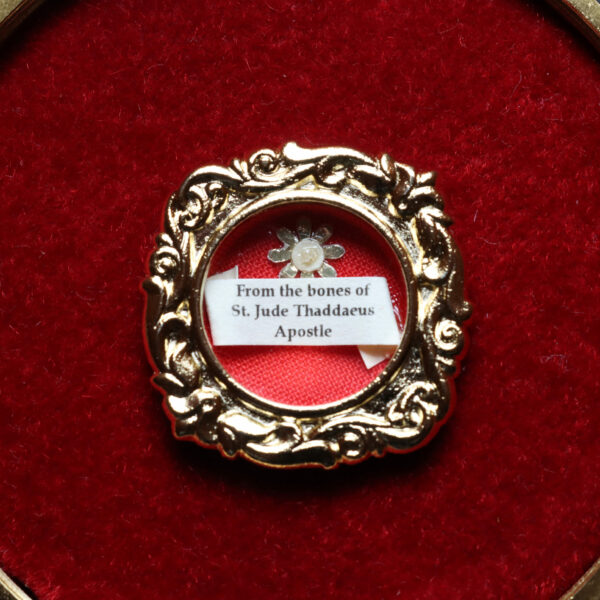 St. Jude, also known as Jude of James, Judas Thaddeus or Thaddeus, was one of the 12 apostles of Jesus and today, is one of the most widely-venerated saints ever. Jude the apostle is mentioned only a handful of times in the New Testament, and has just one line of dialogue in the gospels, speaking during the Last Supper in John 14:22.

The variety of names attributed to Jude is partly due to early translators of the Bible attempting to differentiate Judas Thaddeus from Judas Iscariot. Even in his one line in John’s gospel, he is mentioned as “Judas, but not Iscariot” to avoid the identification of Jesus’ betrayer. Of his most popular titles, “Thaddeus” means generous and kind, while “Jude” can translate to “giver of joy”.

The details regarding St. Jude’s life are incomplete, with some information varying based on different translations and writings. The New Testament mentions Jude or Judas (again, not counting mentions of Judas Iscariot) six times, in four different contexts. This has led to some uncertainty whether Judas Thaddeus is indeed the same person as St. Jude, author of the Epistle of Jude, but most biblical scholars believe them to be one and the same.

St. Jude is also believed to have been related to Jesus – his mother, Mary of Cleophas, was commonly referred to as a cousin of Mary, Jesus’ mother. Jude’s father, Cleophas, was noted as a brother of St. Joseph. Jude also had many brothers, one of them being St. James the Lesser, who was another one of the original apostles.

Most writings describe St. Jude as being married and having at least one child, with references to his grandchildren living as late as 95 A.D. Being one of the main disciples of Jesus Christ, writings place Jude in Mesopotamia (present-day Iraq) to evangelize all in the area. The Epistle of Jude was written around the time of his evangelizing, a brief book with only a single chapter, containing 25 verses. In it, Jude wrote to recent Christian converts who were under persecution, warning them against the lurings of false teachers and ideas, and instead, encouraging them to keep their faith and persevere amidst the harsh circumstances that they faced.

Many believe it was this inspirational writing that earned St. Jude the patronage of lost causes and desperate situations. Following his time in Mesopotamia, Jude traveled to Armenia around 65 A.D., to join St. Simon the Zealot to spread Christ’s word. It is believed that Jude was one of the first to bring Christianity to Armenia, which is why he is also the patron saint of Armenia.

It was in Armenia, alongside Simon, that St. Jude would be martyred, with most writings depicting the saint being beat to death by an axe or club. It is for this reason that an axe or club is often pictured in St. Jude’s icons.

Other popular depictions traditionally include St. Jude carrying an image of Jesus in his hand or close to his chest. This depiction stems from a story in which King Abgar of Edessa (located in what is now Turkey) sent a letter to Jesus asking Him to cure him of leprosy. Along with the letter, he sent an artist to bring him a drawing of Jesus. When the message reached Jesus, He was impressed by Abgar’s faith. Pressing his face against a cloth, he instructed St. Jude to deliver the cloth to Abgar. Jude traveled to Edessa to hand over the cloth, now known as the Image of Edessa, and upon seeing Jesus’ image, King Abgar was healed. The king converted to Christianity, along with most of the people in his kingdom.

Many people have found St. Jude’s patronage of lost causes to be a relatable, and much-needed source of prayers. Devotion to St. Jude began in earnest around the 1800’s in Italy and Spain, before spreading to South America and finally to the United States in the early 1920’s. Many immigrants, dealing with pressures from the Great Depression, found solace in novenas to St. Jude.

St. Jude is the patron saint of the Chicago Police Department, there are shrines named after him in more than 12 countries, and TV superstar Danny Thomas credited Jude for showing him his way in life, leading Thomas to found the world-renowned St. Jude Children’s Research Hospital in Memphis, TN.

Despite the uncertainty regarding certain aspects of Jude’s life and lineage, this much is certain: he was an ardent follower of Christ, who implored fellow Christians to stand firm in the face of difficulty, and to hold fast to the truth of their Christian faith. He is a powerful name to call upon in the face of helplessness, and in today’s tumultuous times, we need his intercession more than ever. 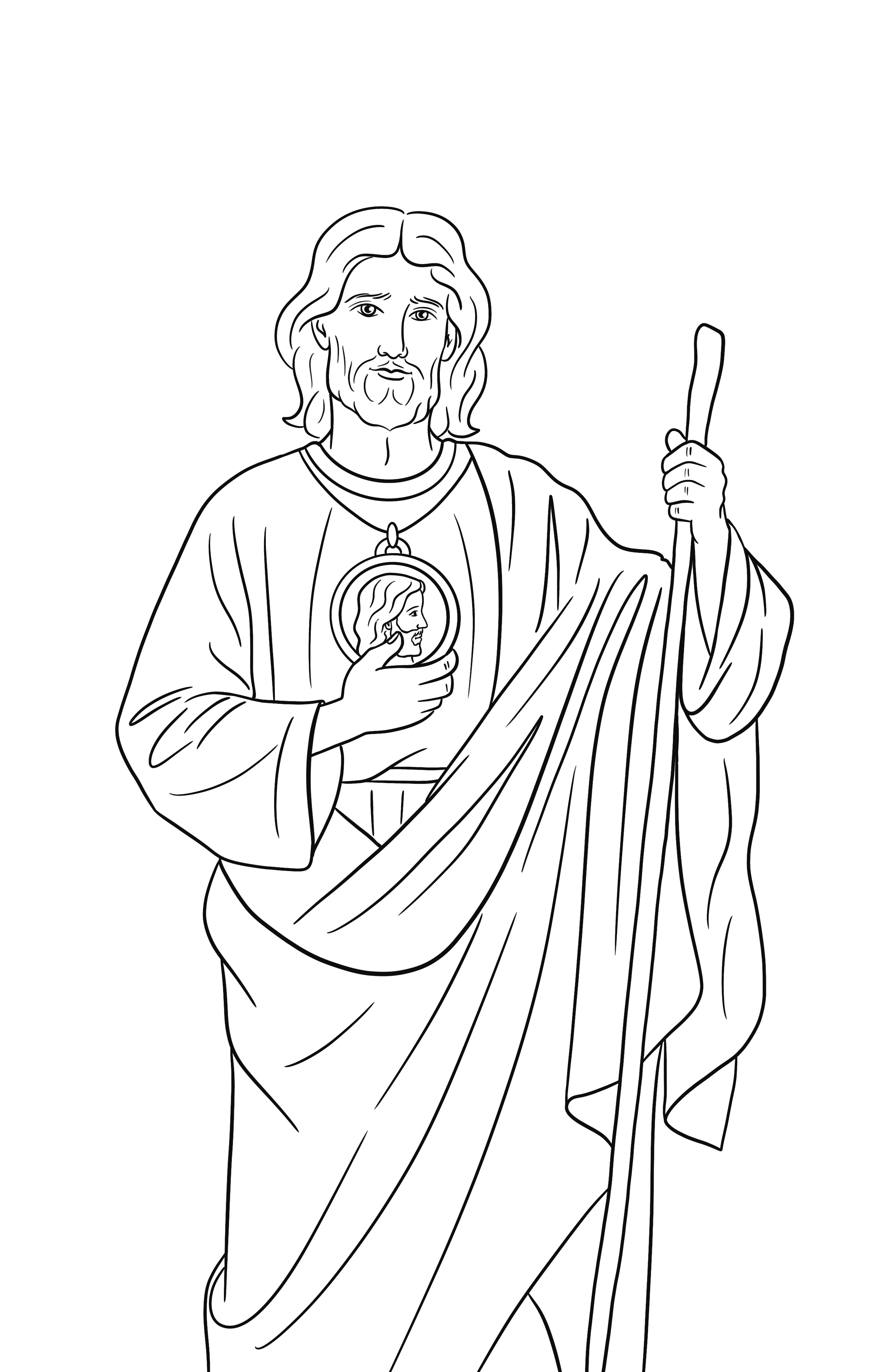