Home > Our Lady of the Angels Chapel  > The Relics > St. Clare of Assisi 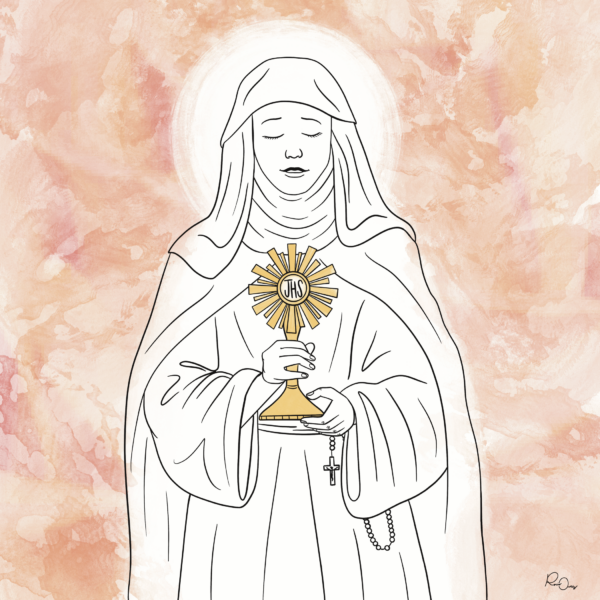 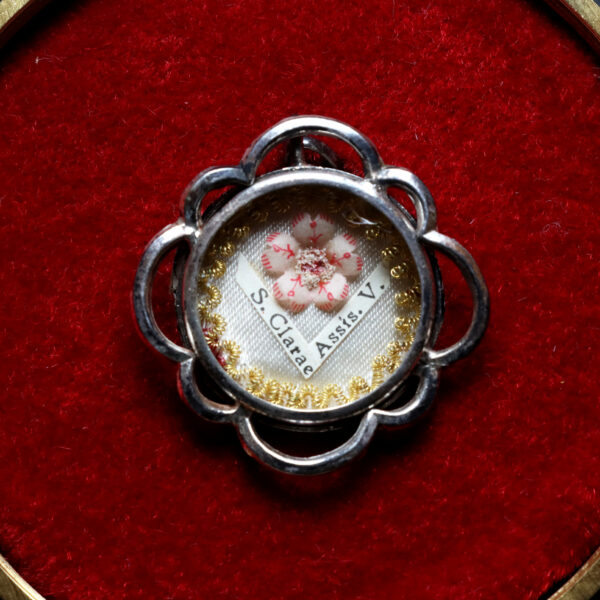 “Love that cannot suffer is not worthy of that name.”

About Saint Clare of Assisi

Saint Francis of Assisi, founder of the Franciscan Order, reached many people during his time traveling the world to spread the word of Jesus Christ. In 1212 A.D., while preaching at a Lenten service at a church in Assisi, his message reached the ears of a teenager named Chiara Offreduccio, and a mission was sparked within her to live a life after the Gospel. That mission would lead her to found a religious order, defend her monastery from attack with nothing but the Blessed Sacrament, and become Saint Clare of Assisi.

Born in Assisi, Italy during the middle ages, her parents Favarone and Ortolana welcomed her to the world on July 16, 1194. She was the oldest daughter to her wealthy parents; her father was a wealthy representative of an ancient Roman family, and her mother belonged to the noble family of Fiumi. Her mother was a devout woman who had traveled on multiple pilgrimages to Rome and the Holy Land, she passed her love of prayer down to Clare. She embraced prayer rather than lounging in her luxurious palace surroundings and dedicated her life to God at a young age.

She was 18 years old when Saint Francis of Assisi came to the church of San Giorgio in Assisi to preach, and the words that she heard would change her life. She asked Francis to help her further dedicate her life to God, and he vowed to help her. So, when her parents chose a wealthy young man for Clare to marry, she refused their arrangement, and on Palm Sunday in the year 1212, fled to the Porziuncula to meet Francis.

She knew there was no turning back now that the message of Christ was ignited within her heart, and she exchanged her rich, fancy gown for a rough, woolen robe and veil, and had her golden hair sheared down to a short, cropped cut. She took vows dedicating her life to God, and the Second Order of Saint Francis had begun.

Clare traveled to the convent of Benedictine nuns of San Paulo, but her father, enraged with her leaving their family and refusing to marry, attempted to force her to return home. He arrived at the monastery alongside her uncles and would’ve resorted to dragging Clare back to their castle, had she not clung desperately to the altar of the church, resisting any attempt to move her. Throwing back her veil to reveal her cropped hair, she professed that she would have “no other husband than Jesus Christ” and her family, recognizing her unbreakable will, left in defeat.

Francis relocated Clare to another monastery of the Benedictine Sisters in Panzo, Italy, and sixteen days after refusing her family’s attempts to dissuade her from religious life, her sister Catarina would also arrive to join the monastery, taking the name Agnes. Nearby the monastery was the restored church of San Damiano, which Francis had famously repaired, and when a small dwelling was constructed for them next to the church, they moved into there.

Clare made it clear that her aim was to live a simple, holy life filled with poverty and Jesus, and that quickly attracted more women who desired to be brides of Jesus in the bold way Clare was pursuing. They soon became known as the “Poor Ladies of San Damiano”, following a simple rule that Francis had established for them. Included in this rule was a focus on austerity, seclusion from the world, and deep poverty. Clare and her fellow sisters did not wear shoes, eat meat, or sleep in a bed, and they kept silent for the large majority of the day. Their lives were filled with manual labor and prayer, but their joy was undeniable.

At the age of 21, Saint Francis appointed Clare as abbess of the order, a role of which she held until her death. The order, which would later become known as the “Poor Clares” were committed to a life of stark poverty. They owned virtually nothing- walking around town begging for alms, completely dependent on whatever food was given to them.

So committed to a life of abject poverty was Clare, that when officials such as King Gregory IX and the Pope himself suggested they tone down their practices, Clare responded ““I need to be absolved from my sins, but I do not wish to be absolved from the obligation of following Jesus Christ.”

Clare humbly served the Lord, but her sanctity and dedication to the Lord was apparent. Many stories tell of her returning from prayer with her face so shining that it dazzled those nearby. Popes, Cardinals and Bishops would travel to the church of San Damiano to consult with her but despite her growing notoriety (she was sometimes given the title “alter Franciscus” which translates to “another Francis”), she never left the cloistered walls of San Damiano.

She would later defend her order valiantly in September of 1240 and June of 1241, when a pair of armies attempted to attack their monastery. Violent soldiers from Frederick II were on their doorstep ready to attack, when Clare went out to meet them with the Blessed Sacrament, displayed prominently in a monstrance. Raising up the monstrance to where the enemies could see it, she fell to her knees and begged God to save them.

Struck by a sudden fear, the attackers fled as fast as they could, without laying hand on a single person in Assisi.

Clare took care of her dear friend St. Francis as he grew old, and when he finally passed away in October of 1226, she continued to promote her order, as well as fight to preserve its core values. Many popes would attempt to impose rulings aimed at watering down their radical commitment to poverty, but she vehemently refused. St. Clare would exclaim, “”They say that we are too poor, but can a heart which possesses the infinite God be truly called poor?”

Despite her health declining rapidly in her later years, Clare would devote herself to crafting her own rule of life for the Poor Clares, one that would remain faithful to the true mission of their order and be resilient to any attempts to water it down.

On August 9, 1253, Pope Innocent IV visited Clare on her deathbed and declared that her rule would serve as the governing rule for the Poor Clares. It is believed to have been the first set of monastic guidelines written by a woman. Two days later, Clare passed away after receiving absolution from the Pope. Before she died, she turned to speak to one of the Franciscan brothers at her bedside and said, “Dear brother, ever since through His servant Francis I have known the grace of our Lord Jesus Christ, I have never in my whole life found any pain or sickness that could trouble me.”

Clare’s remains were held at the chapel of San Giorgio, where she had first heard Francis preach, while a new church was being constructed to hold her remains. At her funeral Mass, Pope Innocent IV (who considered canonizing her immediately upon her death) instructed the friars to perform the Office of the Virgin Saints rather than the Office of the Dead. This ensured that Clare’s canonization process, while not immediate, would begin very shortly following her funeral.

Sure enough, just two years after her death, Pope Alexander IV canonized Clare as Saint Clare of Assisi on September 26, 1255. The examination of her miracles took just six days to complete.

The Basilica of Saint Clare was finished in 1260, and her remains were transferred to a burial place beneath the high altar. In 1263, Pope Urban IV officially changed the title of the Order of Poor Ladies to the Order of Saint Clare.

Saint Clare of Assisi had a passion for poverty; despite having ample opportunity to settle into a life of opulence, she chose instead to shed her attachments to this world and embark on a mission of holiness and simplicity. Her courageous resistance to the attacks by soldiers on their lives and politicians on their radical ideals made her an incredible leader, still guiding the more than 20,000 Poor Clare sisters in over 70 countries to this day. 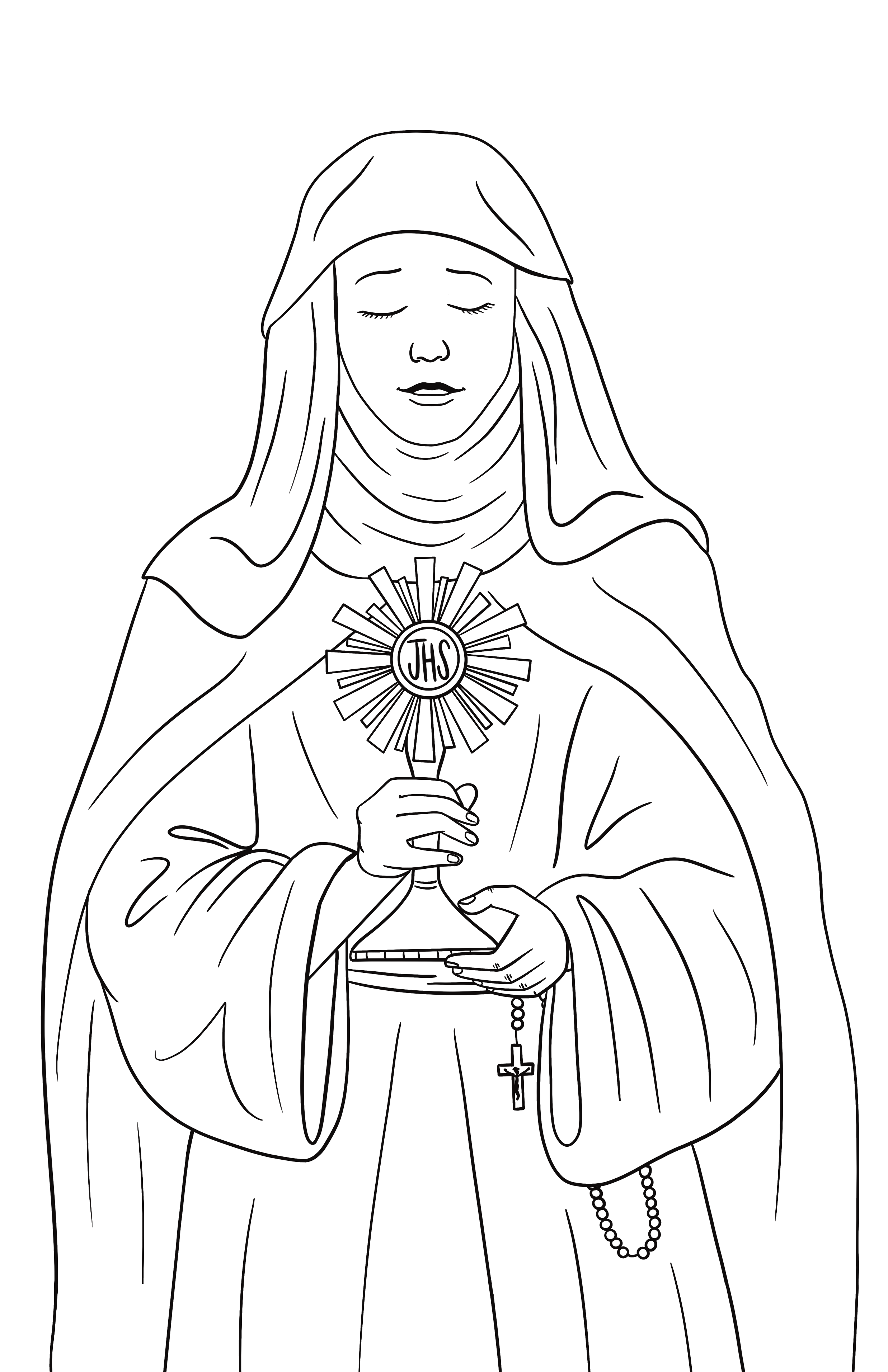 FUN FACT: POPE PIUS XII DESIGNATED SAINT CLARE OF ASSISI AS THE PATRON SAINT OF TELEVISION IN 1958, BECAUSE OF STORIES TELLING THAT WHEN SHE WAS TOO SICK TO ATTEND MASS, SHE HAD THE ABILITY TO SEE AND HEAR IT ON THE WALL OF HER ROOM, AS IF SHE WAS RIGHT THERE IN THE CHAPEL!