Home > Our Lady of the Angels Chapel  > The Relics > St. Bonaventure 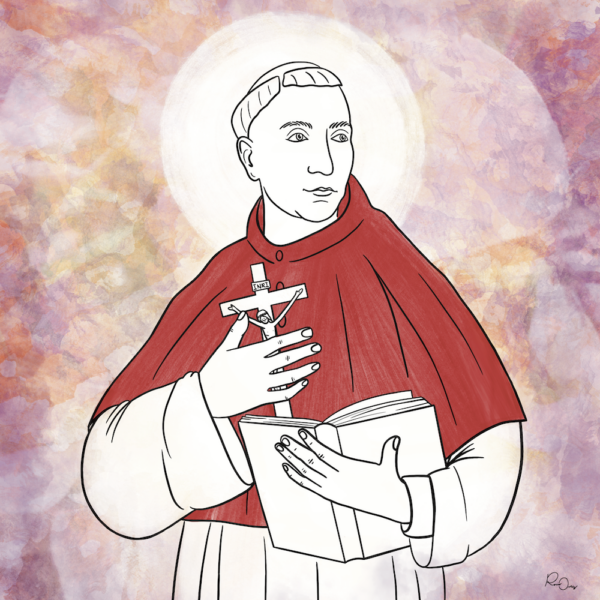 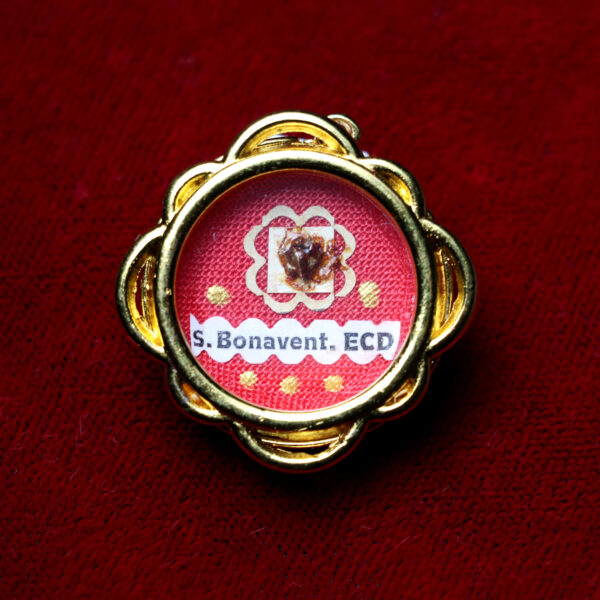 “If you learn everything except Christ, you learn nothing.

If you learn nothing except Christ, you learn everything”

Saint Bonaventure was a wise and holy man who devoted his life to the sharing of Christ’s love through mystical and Christian wisdom. His contributions to the Catholic Church – from his writings, teachings, restoration of the Franciscan Order and organization of the Council of Lyon – are immeasurable in their impact, and he is remembered as one of the most brilliant minds of his time.

Giovanni di Fidanza was born in Bagnoregio, then part of the Papal States, around the year 1221, but not much is known about his early years. There are many variations of how he became known as Bonaventure, but one of the few stories from his childhood recounts his parents, Giovanni di Fidanza and Maria di Ritella, growing anxious when young Giovanni fell deathly ill. Beside herself with worry, his mother sent for none other than St. Francis of Assisi to come and pray over him.

With just a touch and a few prayers, St. Francis healed the sickly 4-year-old boy and foreseeing the greatness of the future saint, cried out, “Oh good fortune!” which in Italian, is “O buona ventura.” And thus, the name “Bonaventure” stuck.

Some historians doubt the precise validity of this story, but Bonaventure himself wrote that he was seriously ill as a child, but thanks to the intercession of Saint Francis, he was “snatched from the jaws of death.” Fast forward to 1243, when a healthy 22-year-old Bonaventure followed after Francis by entering the Franciscan Order. He had already earned a Master of Arts degree in 1243, and after joining the Friars Minor, he studied theology at the University of Paris from 1243 to 1248.

Bonaventure was greatly formed by the brilliant minds he studied under, including Alexander of Hales, an Englishman and a Franciscan, and by his eventual successor, John of La Rochelle. He also made the acquaintance of another brilliant mind – and another relic coming to St. Anthony of Padua – Saint Thomas Aquinas! Together, they were two of the leading voices uniting truth with divine wisdom, and as Bonaventure continued to teach, he became well known for his wisdom.

He became a Master of Theology alongside Aquinas, and produced many notable works, including commentaries on the Bible, a commentary on “The Four Books of Sentences” (a theology book written by Peter Lombard), and the Breviloquium, which was an outlined summary of his theology. In 1255, he received the degree of Doctor, an esteemed title in that time.

Bonaventure was particularly noted for his ability to reconcile and unite differing viewpoints into a harmony of theology, philosophy, and understanding. In 1256, a teacher at the University of Paris named William of Saint-Amour accused the mendicant Franciscans (meaning the friars who were nomadic wanderers, begging for a living) of defaming the Gospels by their practice of poverty, in an attempt to prevent the Franciscans from holding teaching positions at the university. Bonaventure resolutely defended the Franciscan ideal of Christian life, and his ability to share his personal understanding of truth in a way that formed a pathway towards the love of God earned him the title of minister general of the Franciscan Order on February 2, 1257.

Around the time of his appointment, the Franciscan Order was in the midst of some internal turmoil and division. One group, known as the Spirituals, held a rigorous view of poverty that were radical even by the founding views of St. Francis, while another group, the Relaxati, focused on general laxity of life in general.

Bonaventure expertly navigated the divides between these dissenting groups, and thanks to his tireless visits to various provinces, he was able to restore unity to the order and reestablish the spirit of St. Francis among the friars.

At all times, Bonaventure preached the Gospel eloquently and with a noticeable outward happiness. In his writings and teachings, many of which have an appealing warmth to them, he made it clear that only through an inward peace and joy, gained from having God in his heart, could he show happiness on the outside.

He would serve as the superior of the Friars Minor for 17 fruitful years, and his impact is so great on the order that he is sometimes referred to as the second founder of the Franciscans. He even successfully proposed a unified and collected text regulating the daily life of the Friars Minor in 1260, which was accepted and ratified by the General Chapter of the Order in Narbonne.

Bonaventure’s skill at reconciling opposing views caught the attention of numerous Popes, including Pope Clement IV, who nominated Bonaventure for Archbishop of York in 1265. He would turn down the title though, wanting to live a simple and frugal life. A few years later though, the next Pope, Gregory X, appointed him Cardinal Bishop of Albano and it was a dignity that he couldn’t refuse in May of 1273.

Pope Gregory consecrated him in November of 1273 in the French city of Lyon, and his tenure as minister general of the Franciscan Order came to an end in May 1274. His first big task as a Cardinal Bishop was to help prepare the Second Ecumenical Council of Lyons, an important ecclesial event aimed at uniting the divisions between the Latin and Greek Churches at the time.

Bonaventure worked hard to prepare the council and was a leading figure in the reform of the church, but sadly, he would not see its completion. Bonaventure died suddenly on July 15, 1274, while the council was still in session. There were rumblings of mysterious circumstances regarding his death, including a rumor that he had been poisoned, but no evidence ever came to fruition. His death was met with great sadness by all at the council, and he was buried the same day in a Franciscan Church.

His contributions to the church and profound sanctity earned him the canonization of a saint on April 14, 1482 by Pope Sixtus IV, and he was declared a Doctor of the Church in 1588 by Pope Sixtus V. He is often referred to as the “Seraphic Doctor” of the Church, with seraphic referring to the highest order of angels in heaven.

Saint Bonaventure could have easily been remembered only for his immense intellect shared in his teachings and writings. Instead, this wise and holy man chose to reinforce that intellectual ability, while good and valid, is inferior to the direction and affections of the heart. One of his most famous quotes is, “If you learn everything except Christ, you learn nothing. If you learn nothing except Christ, you learn everything.”

His intellectual prowess, paired with his calming, peaceful skills of reconciliation, created a much-needed bright spot in the Catholic Church in a time where many brewing storms could have caused severe, lasting damage if he hadn’t intervened.

Regardless if the story regarding how Bonaventure earned his name happened verbatim or not, we can certainly look at Saint Bonaventure’s life and cry out “O buona ventura!” from the way his life truly served as good fortune for the Catholic Church and our faith today. 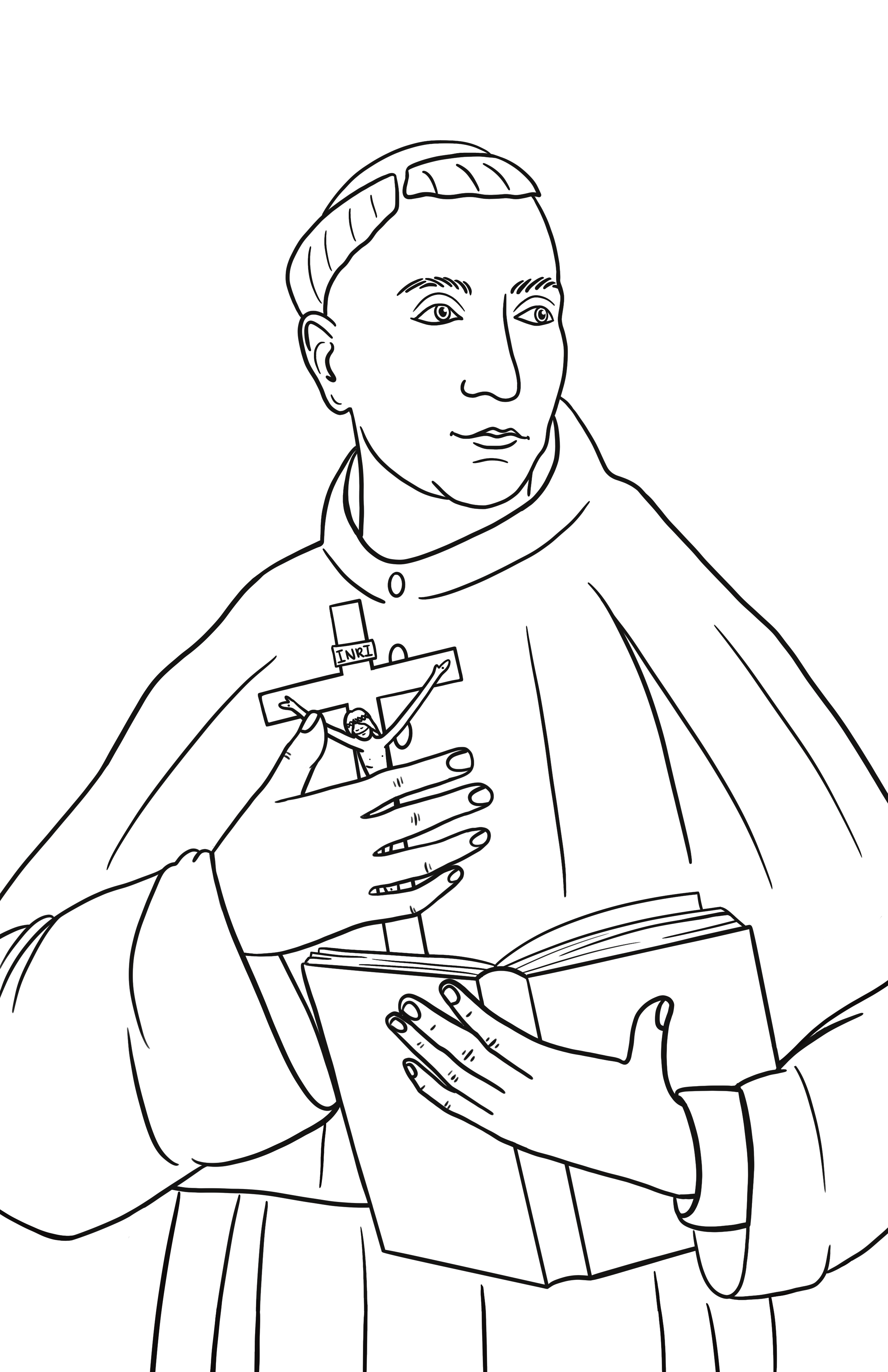 FUN FACT: THERE IS A CHAPEL IN THE PHILIPPINES CALLED SAN BUENAVENTURA THAT IS NAMED IN BONAVENTURE’S HONOR AFTER A MIRACLE IN 1664 WHERE TEARS OF BLOOD WERE SEEN FLOWING FROM THE EYES OF AN IMAGE OF THE GREAT SAINT!