Home > Our Lady of the Angels Chapel  > The Relics > St. Benedict the Moor 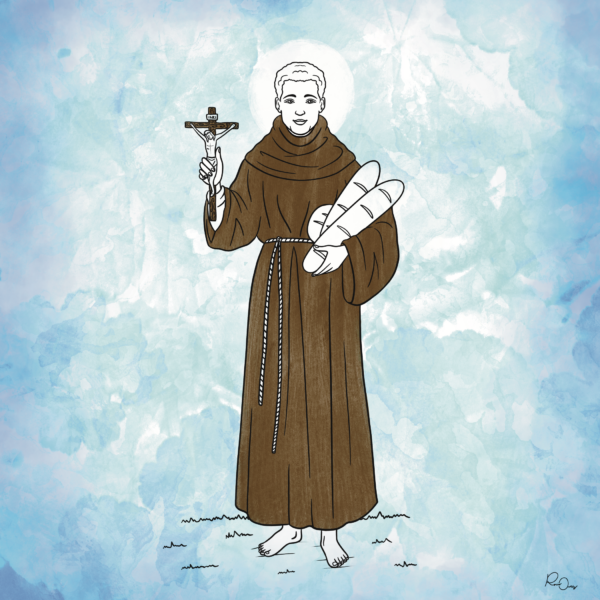 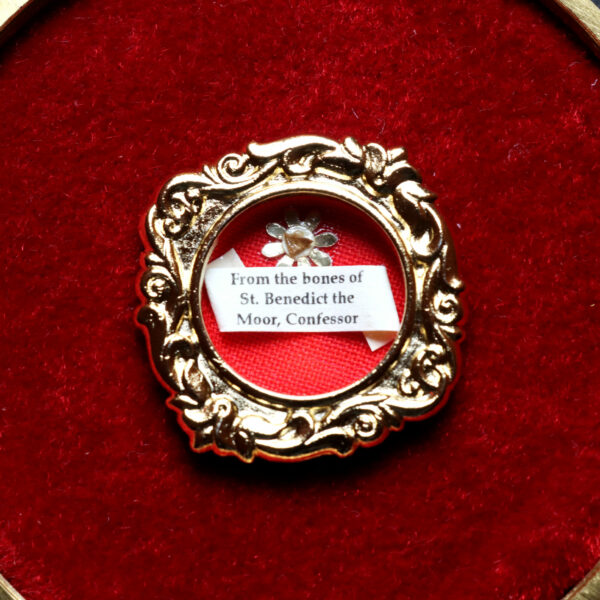 “What dear brothers, is more delightful than the voice of the Lord calling us?”

About Saint Benedict the Moor

Saint Benedict the Moor lived a life of the Beatitudes. Born to two African slaves and illiterate, he would later possess a knowledge of Sacred Scripture and complex theological questions that astonished priests and scholars alike. Growing in fame for his miracles and teachings, he was meek, and chose to travel at night to avoid recognition. Facing persecution throughout his life due to being “il Moro,” or dark skinned, he chose to be a peacemaker, and is remembered for his racial tolerance.

Benedict was born in 1526 in Italy, most likely near San Fratello. His parents, Cristoforo and Diana Manasseri were Africans who were captured and taken as slaves to San Fratello, located near Sicily. After they arrived in Italy, they both converted to Catholicism, prior to the birth of Benedict. Thanks to his parents “loyal service” as slaves, Benedict was born free from slavery.

Just because he wasn’t a slave didn’t mean his life was easy though. Like most peasants, he didn’t attend school, and instead worked as a shepherd through his youth. Even at a young age, he had a heart for the poor, and gave most of what he earned to those in need.

Benedict was often subject to persecution and ridicule due to his race and his parents’ servitude. Despite being the object of frequent humiliation, he bore these insults with dignity, patience and even cheerfulness. By the age of 10, he had become known as “The Holy Black” in Italy.

It was Benedict’s gentleness and peaceful nature that one day attracted the attention of Jerome Lanzi, a member of a group of hermits from nearby Monte Pellegrino. The twenty-one-year-old Benedict was encouraged to join the independent society of hermits, who lived under the Rule of Saint Francis of Assisi. Lanzi, a former nobleman who had left his former life to join the hermits, succeeded in convincing Benedict to join and he soon sold the few possessions he had and joined their monastic group.

Benedict found a welcome home among the small group of hermits, who would relocate to a new location outside Palermo not long after he joined. For many years, he happily worked in the kitchen as a lay brother, serving as an exceptional cook. When he was 28, Jerome Lanzi, who had been serving as the superior of the order, passed away. Reluctantly, it was Benedict himself who agreed to become the new superior, and the community prospered under his leadership.

Following the third Council of Trent in 1564, Pope Pius IV announced a decree for all independent hermit societies to disband. Considering that the Benedict-led hermits were adhering to the Rule of St. Francis, they followed the Pope’s encouragement to join Franciscan orders. Benedict would become a member of the Order of the Friars Minor, and travel to Palermo to the Franciscan Friary of St. Mary of Jesus. He initially returned to the kitchen to continue his work as a cook, and he quickly became known not just for his tasty food, but for his resourcefulness.

Stories tell of his miraculous ability to “multiply the food” and feed more and more people despite a limited amount of food available.

Over the years, Benedict would rise in ranks at the friary, advancing to Master of Novices before becoming the Guardian of the community, a significant leadership role, in 1578. This was especially notable due to the fact that Benedict was still illiterate – and thus he was unable to become a priest due to the requirement of priests and religious figures being able to read and write. Nonetheless, he soon displayed a vast and deep understanding of theology and scripture, and word of his knowledge and sanctity began to spread outside Palermo.

Benedict became known for his many gifts and miracles, one of them including the apparent ability to read the minds of others. This created large groups of lay people, clergy, and curious Italians far and wide flocking to his side, seeking his counsel. Benedict disliked the attention though, and always tried to travel at night when he could. When daytime trips were unavoidable, he would cover his face with a hood.

Benedict also encouraged and developed a stricter Franciscan rule of life as the Guardian of the friary. He fully embraced the austerities of the hermit life, sleeping only a few hours each night, eating sparingly, and keeping seven 40-day fasts through the year.

Benedict continued to serve the friary faithfully as a lay person, drawing people every day to hear his teachings of the scripture, experience his healing abilities, and just be in the presence of a man of divine wisdom and compassion.

Towards the end of his life, Benedict asked to be relieved of his offices, and return to his favorite work: cooking in the kitchen. He resumed his duties as cook but had nearly every day interrupted by crowds who continued to seek alms, advice, prayers and cures for their illnesses.

Around the age of 63, it was Benedict himself who fell ill and on the exact date and time that he had predicted, he passed away in Palermo. He was initially buried in a large tomb inside the friary church, but would have his body exhumed twice, with King Phillip III of Spain creating a shrine for Benedict in Palermo, Italy, and his body was placed in the shrine in 1611. His remains were discovered to be without any noticeable signs of decay, and his relics are still considered incorrupt to this day.

Benedict was beatified by Pope Benedict XIV in 1743 and canonized by Pope Pius VII in 1807. He is the patron saint of African missions, African Americans, Palermo, and Sicily. He became known as Saint Benedict the Moor, after the Italian phrase “Il Moro” meaning “The Black”.

There are several historically black Roman Catholic churches bearing his namesake across the country, including parishes in Georgia, New York, Florida, Nebraska, Illinois, Wisconsin and more.

Saint Benedict the Moor showed others that God doesn’t always call the qualified, but he qualifies the called. He endured the taunts of racial prejudice, refused to be hindered by his illiteracy, and humbly served the Lord whether he was leading in the front or cooking in the back. He had every opportunity to become prideful, arrogant, angry or impatient – instead, he handed what he had to the Lord, and then leaned into the gifts the Lord provided in return. 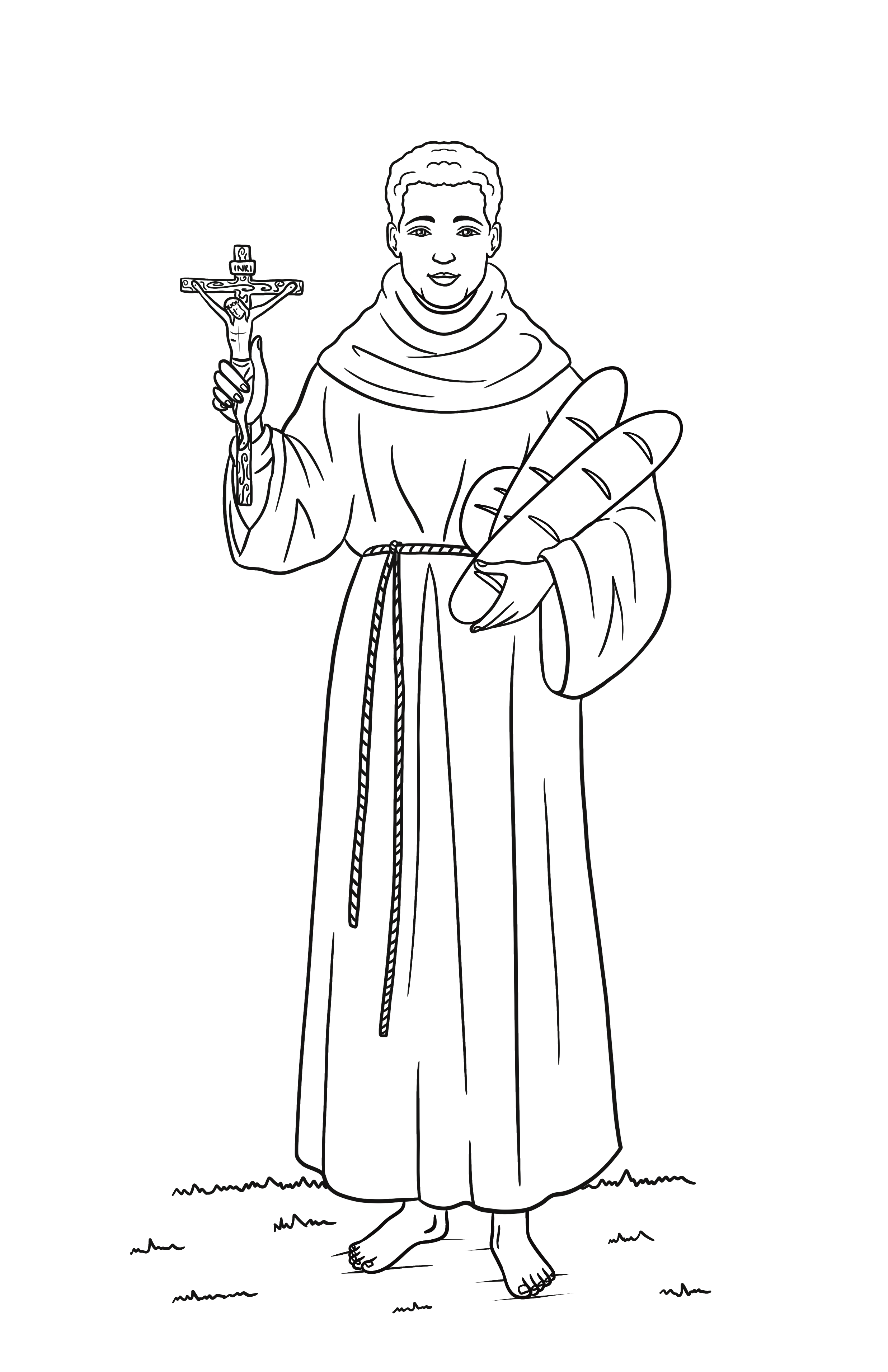 FUN FACT: SOME OF BENEDICT’S FRANCISCAN BROTHERS COMMENT THAT THE HOLY ANGELS COULD BE SEEN WORKING IN THE KITCHEN ALONGSIDE HIM WHEN HE COOKED AND THAT IS HOW HE WAS ABLE TO MIRACULOUSLY PRODUCE MORE FOOD DESPITE LITTLE SUPPLIES BEING AVAILABLE!