The Veil of Mary 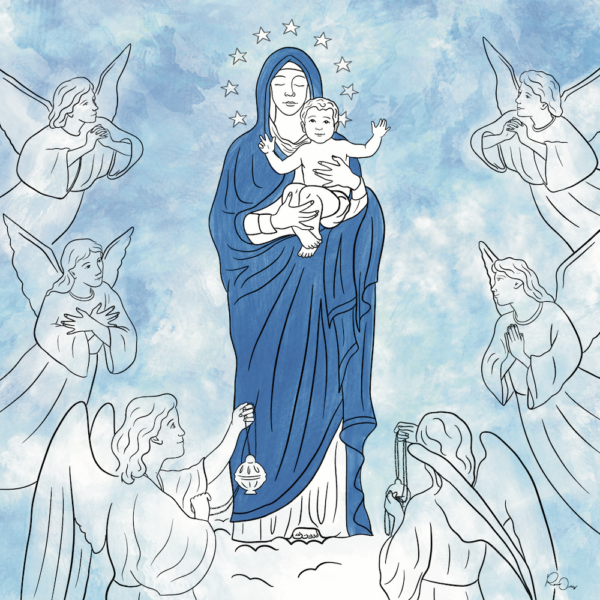 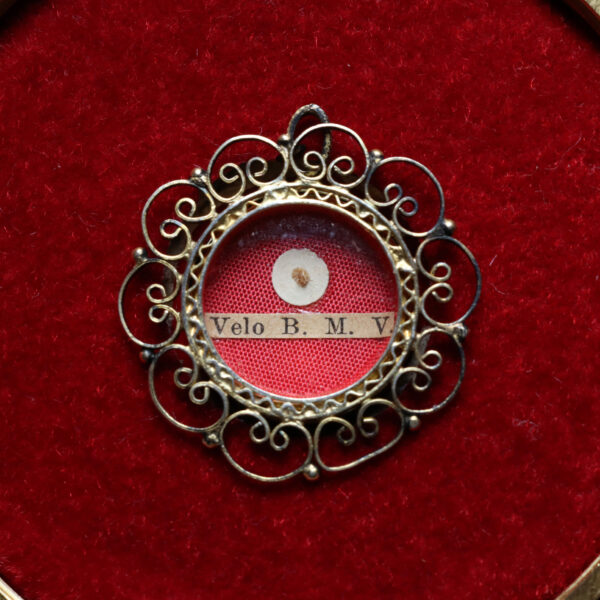 The Veil of Mary
Our Lady of the Angels

Mary said, “Behold, I am the handmaid of the Lord. May it be done to me according to your word.” Then the angel departed from her.

About the Veil of the Blessed Virgin Mary

Through the faith and obedience of a young, teenaged girl from Jerusalem, the Savior of the World came to Earth. Mary, the daughter of Sts. Joachim and Anne, showed immense courage when visited by the archangel Gabriel, who brought the news that she would become the Mother of Jesus. And she continued to show that courage when she remained at the foot of her Son, as He hung upon the cross.

As Roman Catholics, we have more theological doctrines, teachings, prayers, teachings, and devotions to Mary than any other faith group. We hold true four very important dogmatic beliefs: 1. that she is Theotokos, or Mother of God, 2. Her perpetual virginity, 3. The Immaculate Conception, and 4. Her Assumption into heaven.

It is this fourth and final dogma that leads us to a relic from the Blessed Virgin Mary; we firmly believe that following her death, she was Assumed body and spirit up into heaven. Not a single first-class relic of Mary will ever be found. However, a few of her personal items remained here on Earth, which would be second-class relics. Of these, the most venerated around the world is the veil of Mary.

Through many of the monumental moments of Jesus’ life, there was the veiled Mary – presenting Jesus in the temple, initiating the first public miracle at the wedding in Cana, and even praying with the Apostles following His death. It’s unlikely that the seamstress who weaved the silk thread into a beautiful veil could ever have guessed the miracles it would be present for, sitting upon Our Lady’s head.

The life of Mary, and the journey of her veil, are not highly documented and many details have been disputed over the years, but the pieces of information that we do know point to Mary having lived in Ephesus following the death and Resurrection of Jesus. She lived with John, having been instructed by Jesus upon the cross to take Mary into his house, in what is now present-day Turkey.

Her death is not recorded in the scriptures, but tradition told of her body being placed in a tomb in Jerusalem, where she experienced her “dormition”, meaning that Mary did not experience the violent separation of body and spirit that occurs due to the stain of original sin; but instead, Mary, free from original sin, “fell asleep” and was assumed, body and spirit into heaven.

The Apostles, upon realizing that Mary had been assumed into heaven, collected her belongings that remained, including her veil. They were kept in Jerusalem until around the year 400, before St. Jerome, the secretary to Pope Damasus I, took the Mantle of Joseph and Veil of Mary back to Rome for safekeeping.

Had St. Jerome not relocated these precious relics, they likely would have been destroyed during the Muslim invasions that soon followed in Jerusalem.

Tracing the remaining journey of the veil is a tough task, but history tells of the veil being transferred from Jerusalem to Constantinople around the year 800. After being presented by the Empress Irene to the Holy Roman Emperor Charlemagne, it was then given to his descendant Charles the Bald, who gave the relic to a cathedral in Chartres, France.

It was in Chartres that stories tell of the veil being taken from the church and paraded as a flag of war in the year 911, when the bandit Rollo and his henchmen were besieging the town. With the veil proudly raised above the city by the bishop, Rollo and his men were defeated, and the siege failed.

The veil was placed in a reliquary, which began attracting pilgrims far and wide to pray near the veil. Since the veil was viewed to provide a divine protection, many pilgrims placed shirts up against the reliquary in order to wear them prior to going to war or giving birth.

The cathedral in Chartres was badly damaged by a fire in the year 1194, and many feared the veil had been destroyed. However, three days after the fire, a procession of priests emerged from the church with the relic intact, having been rushed to a crypt beneath the cathedral for safety. The cardinal of the area declared this as a sign from Mary that she desired a “more magnificent church”, and reconstruction began immediately.

Fast forward to the 14th century, when a lead box was discovered at the Basilica of St. Anastasia, where St. Jerome had served as the parish priest. Two miles from St. Peter’s, the boxes were opened, and the Veil of Mary and Mantle of St. Joseph were discovered. They were immediately enshrined in the chapel, and in the 1750’s, the bishop authorized the creation of relics from tiny pieces of the veil.

Scientific tests on the veil found that the silk veil is of Syrian design and can be traced back to the 1st century. At one point, the fabric was thought to be that of a tunic, but after being unwound, it was discovered to in fact be a veil. Every year in August, on the Feast of the Assumption of Our Lady, the veil is processed with great reverence.

With shared reverence, have in our reliquary a small thread of this very veil in the Our Lady of the Angels Chapel. May this relic guide us closer to Jesus in order to grow in faith and love for Him, just as the wearer of this beautiful veil demonstrated every day of her life. 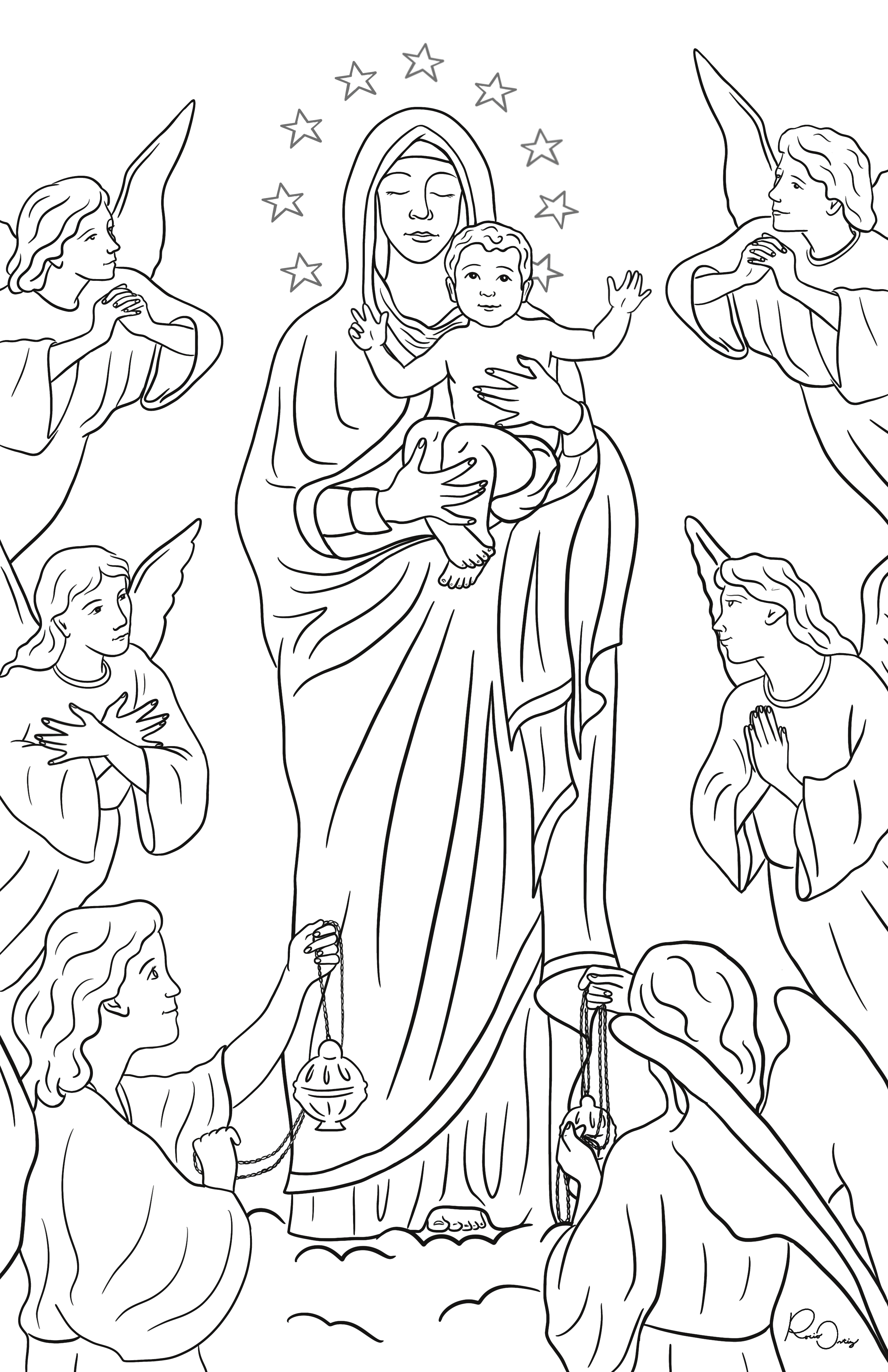 the Lord is with thee.

Blessed art thou amongst women

and blessed is the fruit of thy womb, Jesus.

Holy Mary, Mother of God, pray for us sinners,

now and at the hour of our death.