Wood of the True Cross 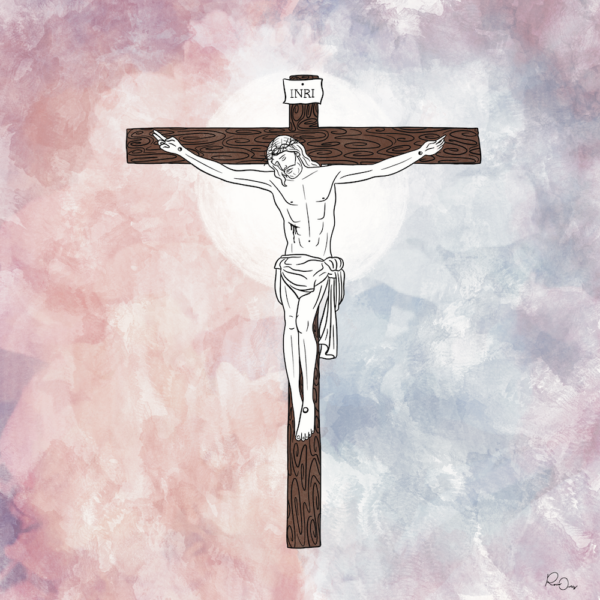 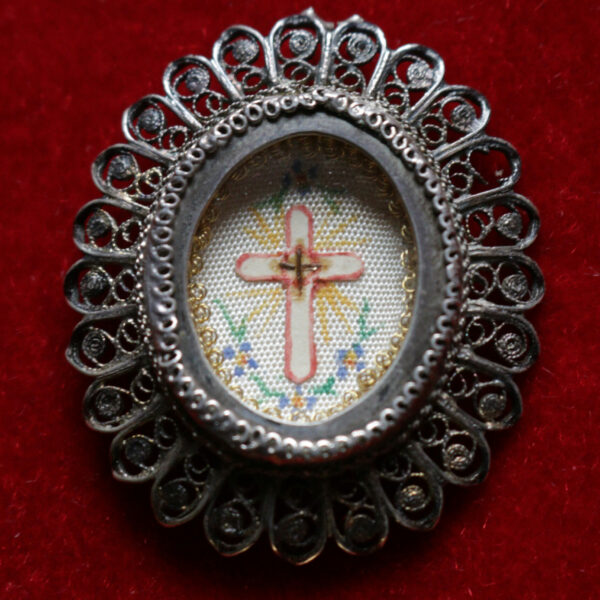 The Wood of the True Cross

“Even on the cross He did not hide Himself from sight; rather, He made all creation witness to the presence of its Maker.”

About the Wood of the True Cross

A crucifixion was an execution, but it also served a number of other purposes for those conducting the brutal punishment. Used by Persians, Carthaginians, and Macedonians far before Jesus Christ walked the earth, crucifixions were intimidating reminders for those contemplating committing similar crimes. Bodies were often left hanging upon the cross, to serve as a reminder for all those entering the city the pain that awaited would-be criminals.

The gruesome spectacle was also meant to humiliate. The person being crucified was usually stripped naked; their clothes divided among the soldiers. Several sources tell of various methods conducted to keep those hanging upon the cross alive as long as possible; thus prolonging their suffering.

Crosses weren’t always used – early writings tell of crucifixions taking place in the sixth century B.C. by the Persians, with the victims tied to a tree or post with their feet dangling.

The Romans first encountered this vicious practice after Alexander the Great invaded Persia and brought it to the eastern Mediterranean. In the third century B.C. while fighting Carthage in the Punic Wars, Roman officials would discover and soon “perfect” the execution – designing the deaths to cause maximum pain through the nail placement and scourging. In Roman-style crucifixions, it could take days to die, if soldiers didn’t break the prisoner’s legs in order to hasten death.

According to ancient historians, mass crucifixions occurred multiple times around the world, but by far the most famous crucifixion in the world took place in 1st century Judea, when Jesus Christ, a Nazarene, the son of Mary and Joseph, was condemned to die on a cross. He carried the heavy pinewood, which with the crossbeam attached would normally weigh around 300 lb, up to Golgotha, was laid upon the cross, nailed to it, and then lifted up, in order to lift humanity out of eternal damnation.

As Catholics, we know what happens next after Jesus’ body was taken down from the cross and placed in a tomb. What you may not know, is what happened to that empty, bloodstained cross.

The Roman Emperor Hadrian, who reigned A.D. 117-138, abolished the name Judea and renamed the area “Syria Palaestina” after a Jewish insurrection around the year 132. Ancient writings report that the ensuing war left 580,000 Jews dead, with 50 towns and 985 villages razed. Hadrian forbade Jews from entering the area, and demolished any remaining temples, deciding instead to erect temples to pagan gods and goddesses on the top of Mount Calvary.

In an ironic twist, it was this destruction and ensuing construction of new buildings on the landscape that would ensure the preservation of the holy and sacred sites of Jesus’ crucifixion, deep below the ground.

Fast forward more than 40 Roman Emperors later, and Constantine the Great seized control of Rome in the year 312. It was not a smooth transition of power though, as his father Constantius I, the previous emperor, had died during a military expedition against the Picts in 306. His dying act was to recommend his son as successor, but there were rumbles of discontent among the senior and junior emperors in Rome. One of the emperors, Maxentius, declared war and marched into battle with an army twice the size of Constantine’s.

When Maxentius and his forces arrived on the battlefield, they were greeted by an unfamiliar symbol facing them. On the Roman standards and shields, was a cross. There are conflicting reports regarding Constantine adopting this symbolism, but most historians tell of Constantine reportedly praying before the battle that the true God might “reveal to him who he is and stretch forth his right hand to save him.” Then, marching at midday, he suddenly looked up at the noonday sky to see a bright cross of light flash among the heavens, with an inscription upon it: “In Hoc Signo Vinces” which translates to “In this Sign Conquer.”

Constantine, bolstered with the assurance that the True God had indeed heard him, had his soldiers inscribe the cross on their shields before advancing on Maxentius, who held a much better strategic position for the battle near the Milvian Bridge in Rome.

It would matter not. Maxentius’ troops were broken before the first charge had completed and he was among those who were pushed into the Tiber River and drowned.

After the battle, Constantine does not ignore or forget whom it was that earned him the victory. In 313, the Edict of Milan was created as an agreement among the Roman Empire to treat Christians benevolently. This was a monumental shift, since for almost 250 years, Roman emperors had gained support by voicing their favor of persecuting Christians; Nero and Diocletian had both conducted savage tyranny against them during their reigns. Now, here comes Constantine issuing an order that not only should the Christian Church be tolerated just as other religions are, but he went so far as to build places of worship for Christians and be baptized himself.

Around the same time of Constantine’s conversion to Christianity, his mother Helena also converted. It was on the authority of her own son that she was sent to Palestine in the year 324 to search for sacred sites and relics to be reverenced.

In the years that followed, Helena would play a role in the construction of two churches, the Church of the Nativity in Bethlehem (at the site of Christ’s birth) and the Church of Eleona on the Mount of Olives (at the site of Christ’s ascension into heaven) while on her pilgrimage. She followed in the footsteps of Christ while on her journey – clothing the naked and poor, giving money to those in need, and even freeing some workers from servitude in the mines.

As she arrived in the area formerly known as Judea, the area was still being rebuilt. The pagan temples constructed by Hadrian were demolished, and excavation had begun on the area. The remains of a tomb that was purported to be that of Jesus Christ himself was discovered, and they built a new shrine over the area, which today stands the Church of the Holy Sepulchre in Jerusalem.

Details regarding the discovery the True Cross are lacking and often contradictory among many ancient writers, but the basis of the story is generally accepted as this:

Around 326, Helena was traveling the area, earnestly seeking anyone with info regarding the site of the True Cross. An aged Jewish man who had inherited traditional knowledge of its location soon heard of Helena’s searching, and guided her to the location. The Cross had been thrown into a rock-cistern so as to prevent the followers of Jesus from finding it following His crucifixion, but after a brief excavation, laying before Helena were three crosses.

But which one had held Christ? Theodoret, a biblical commentator and Christian Bishop of Cyrrhus in the 400’s, wrote a detailed account in his book titled Ecclesiastical History of how Helena and Macarius, the president of the city, determined which was the True Cross:

A woman who was either close to death or who had long been suffering an affliction of sorts was brought from the city. One by one, she touched each cross in earnest prayer, attempting to “discern the virtue residing in that of the Savior.” Nothing happened upon touching the first and second cross, but as she touched the third and final cross, she was immediately healed, and it was determined that this was the True Cross of Jesus Christ, upon which His precious Blood had spilled.

According to tradition, this discovery took place on May 3, 326 A.D. The Church of the Holy Sepulchre was dedicated and blessed by Constantine in 335 A.D. and the Cross remained in Jerusalem to be venerated regularly among the faithful. It was briefly stolen in 614 A.D. after the Persian invasion of Syria and Palestine, but ultimately returned in 629.

Around the year 1009, the Church of the Holy Sepulchre was ordered to be destroyed by Al-Hakim bi-Amr Allah, the sixth Fatmid caliph. Christians in Jerusalem managed to hide part of the True Cross, and it remained hidden until the First Crusade. The surviving relics would slowly have its fragments divided among rulers in various nations, with splinters of the True Cross being presented as gifts and peace offerings.

In 1187, the True Cross was captured by Saladin during the Battle of Hattin. Christian rulers attempted to ransom it back but were unsuccessful. The last officially recorded mention of the True Cross’ location was in 1219, when the True Cross was offered to the Knights Templar by Al-Kamil in exchange for a siege on Damietta being lifted. However, the True Cross was never delivered; Al-Kamil did not actually have it. Last seen in the city of Damascus, the wood upon which Jesus had hung disappeared from historical records.

Luckily, many relics of the True Cross remain in the world today. In those early years following the discovery of the True Cross, fragments had been divided and distributed widely among churches. “The whole earth is full of the relics of the Cross of Christ,” wrote Cyril of Jerusalem. By the Middle Ages, there were so many churches that claimed to possess a piece of the True Cross, that John Calvin famously quipped “if all the pieces that could be found were collected together, they would make a big ship-load.”

While indeed forged relics were a common occurrence around the 11th century, a study conducted by Charles Rohault de Fleury, a French architect who designed buildings across Paris in the 19th century, cast a much different picture. In 1870, Fleury wrote Mémoire sur les instruments de la Passion in which he drew up a catalog of all known surviving relics of the True Cross. Through his calculations, in which he determined the supposed weight of the cross carried by Jesus, compared to the combined volume of all known relics, he concluded that the remaining fragments together again wouldn’t reach even one-third of the size of the original torture device.

Today, the Catholic Church celebrates the Feast of the Exaltation of the Cross on September 14, the anniversary of when the Church of the Holy Sepulchre was dedicated by Constantine. On Good Friday, Catholics around the world venerate the cross, the symbol of their salvation.

Before Jesus Christ, the cross was final. It was a death sentence, a savage and shameful way to reach the afterlife. Jesus, fully God and fully man, put every ounce of the cross upon His shoulders on the path to Calvary. He embraced the sharp nails as they pierced His skin. He hung upon the wood, beaten so badly He was hardly recognizable. But that holy day, the cross lost its finality. Jesus “gave up His spirit”, was taken down from the cross, and rose again.

Christians around the world now view the cross not as an intimidating reminder against criminal activity upon entering a town, but instead as the ultimate symbol of love through the supreme sacrifice of Jesus Christ.

Timeline of the True Cross

326 A.D.: ST. HELENA DISCOVERS THE TRUE CROSS IN JERUSALEM ON MAY 3RD.

335 A.D.: CONSTANTINE DEDICATES THE CHURCH OF THE HOLY SEPULCHER ON SEPTEMBER 14TH.

614 A.D.: JERUSALEM IS INVADED BY THE PERSIANS WHO STEAL THE TRUE CROSS.

629 A.D.: THE TRUE CROSS IS RECOVERED AND BROUGHT BACK TO JERUSALEM.

1219 A.D.: LAST OFFICIAL RECORDING OF THE LOCATION OF THE TRUE CROSS