Home > Our Lady of the Angels Chapel  > The Relics > St. Teresa of Ávila 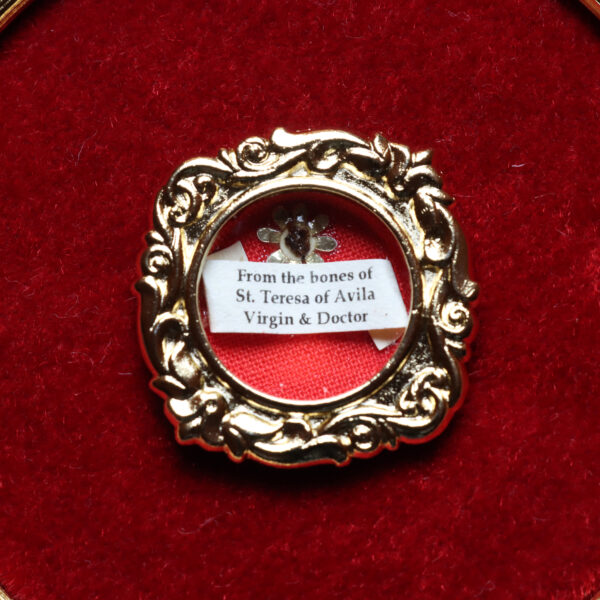 “To have courage for whatever comes in life —
everything lies in that.”

About Saint Teresa of Ávila

The religious reformer known as Saint Teresa of Ávila was born Teresa Sánchez de Cepeda y Ahumada on March 28, 1515 in Ávila, Spain. She was the third child in a family descended from Jewish merchants who converted to Christianity. Growing up, Teresa was captivated by the thought of spending eternity with God, and she soon became intrigued by the lives of saints and martyrs.

So infatuated was Teresa, that before she would even turn ten years old, she would try to run away from home to devote her life to Christ as a martyr in a Muslim country, although her uncle found her down the road and sent her back home to Beatrice, her mother.

Beatrice would pass away when Teresa was 14, causing a profound grief that would initially prompt a stronger devotion to the Virgin Mary, but by the age of 16, Teresa was more focused on clothes, flirting and rebelling. This newfound interest in worldly matters, along with the strict religious standards imposed by her father, caused Teresa to have a harsh sense of self-judgement, considering herself a “miserable sinner.”

It wasn’t long before her father noticed the loss of her childhood zeal for God, and decided Teresa would benefit from a change of scenery. She was sent to be educated in a convent of Augustinian nuns. While Teresa found their way of life dull at first, she grew to like religious life, and when the time came for her to choose between marriage or religious life, she became a nun of the Carmelite Order (a decision which she wrote was “the safest for someone as prone to sin as she was”). This decision though was in direct opposition of the will of her father, who was displeased by the easy-going nature of the Carmelite Convent.

Indeed, the convent was not the pious, contemplative institution Teresa expected. Many women who had no place else to go would end up in the convent, whether they felt they had a vocation or not, and numerous women were accepted for purely financial reasons. Parties seemed to take priority over piety, and the convent became overcrowded with a steady stream of visitors, which caused Teresa to struggle to grow in her relationship with God or find time for quiet reflection.

Shortly after becoming a nun, Teresa experienced a severe case of malaria that would leave her in great pain for years. She was bedridden for a long period of time, endured a four-day coma, and many were convinced she would not survive. However during this period of pain, she began her very first experiences of divine visions. Teresa described the sensation as an inner sense of peace that seemed to transcend the intense physical pain of the body.

One of the more striking visions Teresa experienced came in the form of an angel who would appear holding a long, golden spear. The angel was smiling and gentle, so Teresa wasn’t frightened by him, but she was surprised when he thrust the spear into her heart. She simultaneously felt severe pain and sweet ecstasy from the spear, a symbol of God’s love. Writing in her autobiography, Teresa described the experience – “the sweetness of the pain was so surpassing that I couldn’t possibly wish to be rid of it. My soul couldn’t be content with anything but God.”

Many clergy dissuaded her from pursuing the visions though, as they felt they were the delusions of the devil. Nonetheless, Teresa grew significantly in mental prayer during her recovery, but once back to health, her prayer life plateaued. Having lost the confidence to pray as she ought, she settled instead to lapse into a more routine prayer life. She would remain an obedient Carmelite, but struggle to establish a close personal connection to God for nearly twenty years.

Around the age of 40, Teresa experienced a spiritual awakening, finding herself dramatically called back to the practice of contemplative mental prayer. Furthermore, she felt called to restore the Carmelite spirituality back to its original purpose: to live for God. She plunged back into her faith, emboldened to reform the Church.

Teresa desired to found a new convent that refocused on the basics of contemplative prayer and poverty. Around the same time, she became close friends with a Spanish priest named Juan de Yepes y Álvarez, who would come to be known as St. John of the Cross. With his close collaboration, Teresa founded the Order of Discalced Carmelites. Discalced means barefoot, a term Teresa chose to symbolize the simplicity to which she wished to return the order. The move was met with intense opposition and scrutiny from public officials and religious leaders, who denounced her from the pulpit, started legal proceedings against her, and told her she should raise money for the convent she was already in. The bulk of the hostility came from the fact that the convent existed without endowment, but Teresa stood firm on the focus of poverty, and eventually the opposition waned. In 1562, with Pope Pius IV’s authorization, she opened the first convent of the Carmelite Reform, St. Joseph’s.

Teresa would go on to found 30 more convents during her life, as St. John of the Cross was initiating the Carmelite Reform for men, opening the first monastery of the Primitive Rule in Duruelo Spain in 1568.

Teresa’s health never fully recovered following her bout with malaria, and the rigors of opening more convents and traveling around Spain left her frail. However she never let her poor health dissuade her from her life’s mission, and she persevered through continued criticism, clashes with the Spanish Inquisition, and even an attempt to excommunicate her order.

While traveling through Salamanca in 1582, her health failed her for the final time, and she accepted her illness as God’s chosen means for calling her into His presence forever. A fellow Carmelite described the hours before her passing: “She remained in this position in prayer full of deep peace and great repose. Occasionally she gave some outward sign of surprise or amazement. Her facial expression was so wondrously changed that it looked like a celestial body to us. Thus immersed in prayer, happy and smiling, she went out of this world into eternal life.”

Teresa of Ávila was canonized on March 12, 1622, and in 1970, she received the prestigious title of Doctor of the Church by Pope St. Paul VI. She is only one of two women to have ever been proclaimed as such.

Saint Teresa is remembered as one of the great mystics of the Catholic faith, and her writings are heralded as literary canon regarding Christian mysticism and Christian meditation. Her writings Way of Perfection and The Interior Castle have helped generations of faithful Christians grow in contemplative prayer to this day.

Teresa lived in a tumultuous time, but was determined to stand on her own two feet, and boldly pursue the call of God. Enthusiastic, courageous, and outgoing, she brought about immense reform despite the opposition of poor health, political turmoil, and her own feelings of mediocrity. Yet she struggled forward, faithful until the end, to found monasteries, share the beauty of mental prayer, and fall into the embrace of the Lord. 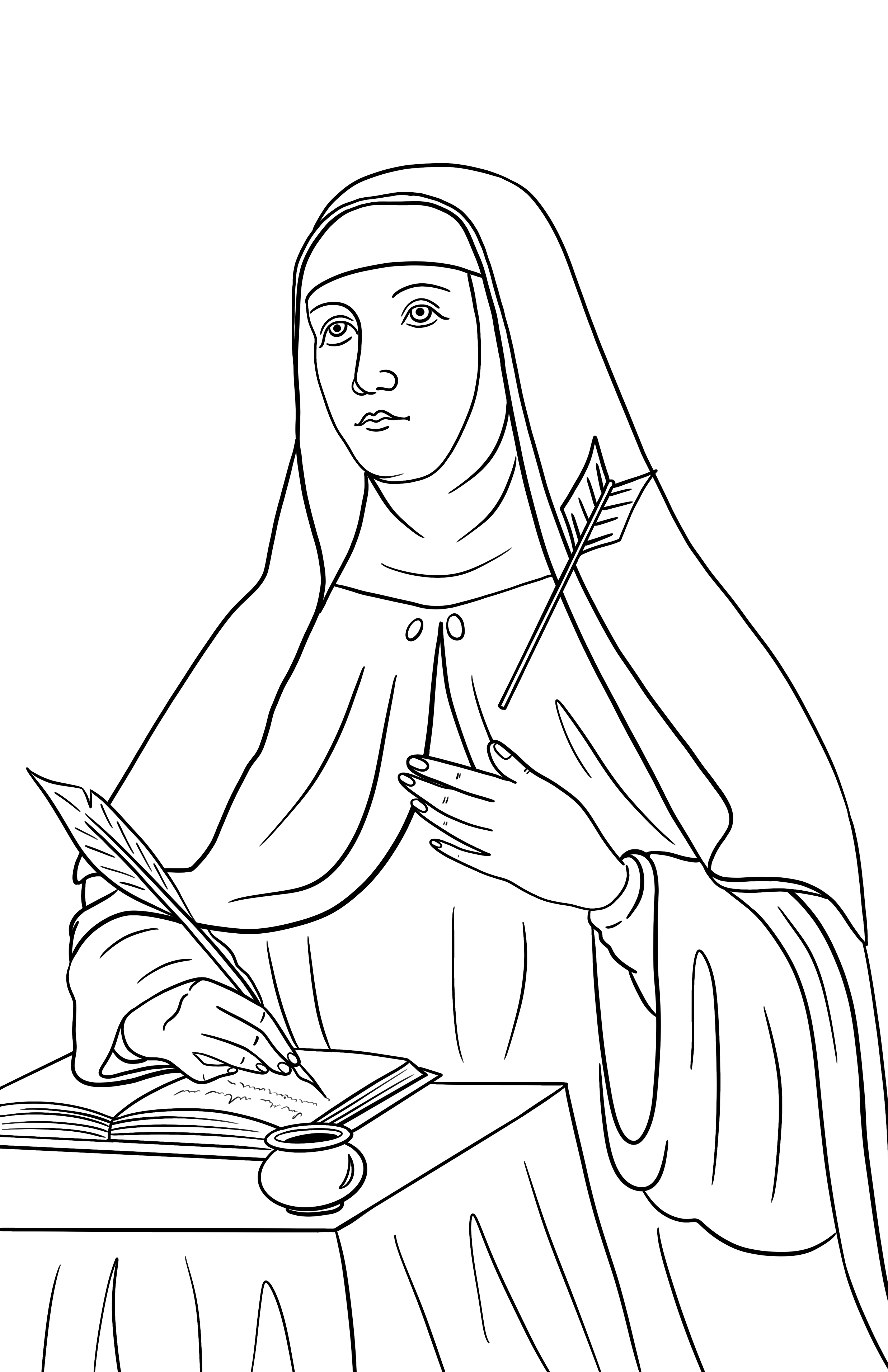 FUN FACT: SOMETIMES WHILE PRAYING, TERESA WOULD BE SO FILLED WITH DIVINE CONTEMPLATION THAT HER BODY WOULD SPONTANEOUSLY LEVITATE. SHE WAS EMBARRASSED BY THESE PUBLIC DISPLAYS, AND ASKED OTHER NUNS TO SIT ON HER TO PREVENT HER FROM FLOATING AWAY.