Home > Our Lady of the Angels Chapel  > The Relics > St. Monica 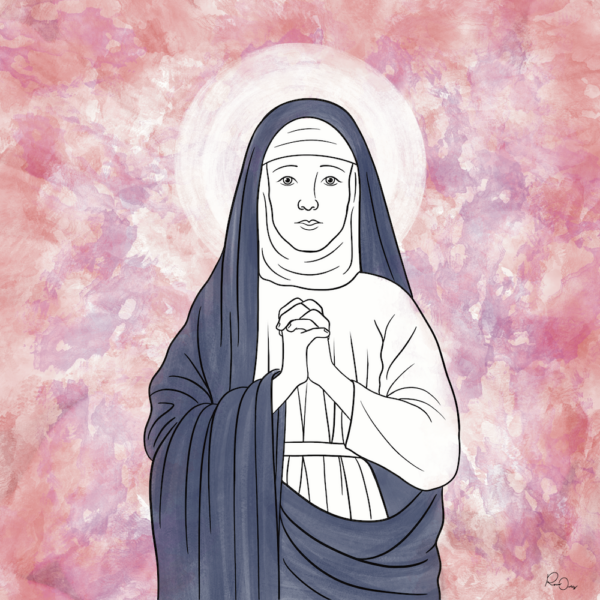 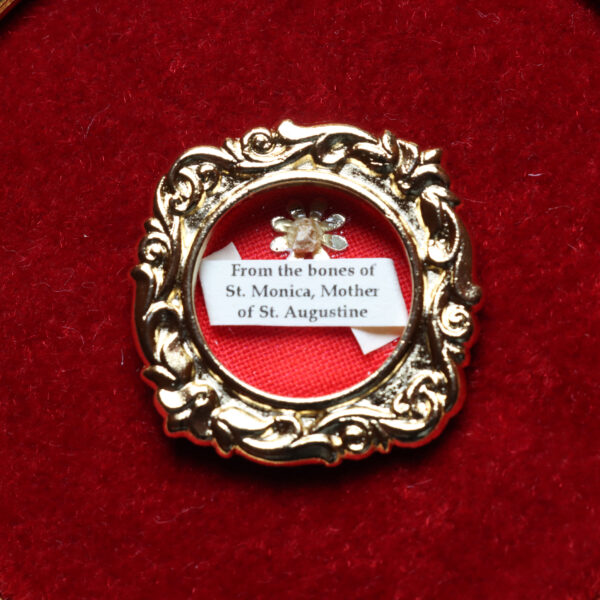 “Nothing is far from God”

The life of Saint Monica gave her every opportunity to be a bitter mother, a nagging wife, and a lukewarm Christian, but instead, she patiently persevered through every difficulty and is now known as a holy, virtuous saint.

Nearly everything known about Saint Monica comes from the writings of her well-known troublemaker of a son, Saint Augustine, so many facts and dates are unconfirmed in their exact detail. Regardless, it is believed Monica was born around the year 332 A.D. in North Africa, in the town of Tagaste (present-day Algeria). She was married off at a young age to Patricius, a pagan Roman official. Patricius inherited his mother’s violent temper, and it was just Monica’s luck that her mother-in-law also lived with the couple, leading to more than the occasional temper flare.

It is written that Monica’s prayers and Christians beliefs “deeply annoyed” Patricius, but he is said to have nonetheless respected her beliefs. Still, there was animosity between the couple when the topic of baptism arose for their three children, Augustine, Navigius, and Perpetua. Despite Monica’s pleadings, Patricius wouldn’t allow them to be baptized Christians, until their son Augustine fell ill. Seeing her distress, Patricius finally agreed, only to withdraw his consent when the boy recovered.

Monica was undeterred by her brutal husband and irritable mother-in-law, even when Patricius’ infidelity caused further rifts in their marriage. Monica prayed for their conversion every night, and slowly but surely won them over for the Lord. Patricius finally converted and was baptized one year before his death.

During that time of Patricius’ gradual conversion, their three children were growing up in drastically different directions. Perpetua and Navigius both entered religious life, but their oldest son Augustine, who had recovered from his previous ailments, became lazy and coarse in his life decisions. When Patricius passed away, Monica, distressed about her son’s future, sent the 17-year-old Augustine to Carthage for schooling.

Unfortunately, Carthage would provide Augustine ample opportunity to further fall into immorality, greatly wounding Monica’s heart. He had become a Manichaean, a 3rd century heretical religion focused on “all flesh is evil” and other non-Christian views. When Augustine finished his education, he returned home to his mother and when he shared his newfound views with her, she drove him away, refusing to allow him to eat or sleep in her house. Monica spent many tearful nights praying earnestly for her son’s conversion. Despite their estrangement, she soon had a vision that assured her Augustine would one day return to the faith, and that she needed to reconcile with her wayward son.

Determined to bring her son closer to Christ, but still distraught about his current religious views, she visited a local bishop who consoled her with the words “the child of those tears shall never perish.” From that time on, Monica began earnest fasting and prayer for her son, staying as close to him as possible, which for the future Saint Augustine, was sometimes a little too close.

At the age of 29, Augustine made the decision to travel to Rome to teach rhetoric. Naturally, Monica was determined to join him in order to keep a close and prayerful eye on him, an idea which Augustine wasn’t overly fond of. He attempted to stealthily depart for Rome without his mother by telling her he was going down to the docks to say goodbye to a friend, only to instead jump on a ship himself and sail away.

The inspired Monica refused to allow her son to slip away from her again, and she soon set a course for Rome herself. When she arrived, she learned he had just traveled further on to Milan. So too did Monica. Her pursuit of her son led her to the doorstep of a third future saint in this journey, the wise Saint Ambrose.

Ambrose was the Bishop of Milan who Augustine quickly came under the influence of thanks to his deep theological knowledge and influence. He also became Saint Monica’s spiritual director, and she accepted his advice in everything, humbly growing in holiness alongside her son, who she continued to pray for day and night.

After six months in Milan, Monica was able to joyfully witness Augustine finally joining the church, being baptized by Saint Ambrose on Easter in the year 387, at St. John the Baptist church.

Following his baptism, Monica and Augustine departed for Africa, where they felt called to spread the word of God, but although no one else was aware of it, Monica knew her journey was nearing its end. While stopped on their way in the Roman city of Civitavecchia, Monica fell severely ill, and eventually passed away.

Augustine’s recording of her final words paints the picture of a loving mother who desired nothing more than to pursue her son in order to return him to the embrace of Christ.

“Son, nothing in this world now affords me delight. I do not know what there is now left for me to do or why I am still here, all my hopes in this world being now fulfilled.”

Monica’s remains were buried in Ostia, and then later moved into a hidden crypt in the church of Santa Aurea during the 6th century. Monica’s witness and sanctity despite an unfaithful husband and a faithless son led to a strong following of faithful believers, and a feast in her honor was held every year on May 4th. In 1430, Pope Martin V ordered Monica’s relics be brought to Rome for veneration. As her relics were being transported to Rome, numerous miracles were said to have occurred along the path, further spreading the legend of Monica of Hippo.

Her relics would eventually find their home in the Basilica di Sant’Agostino, a church built to honor Saint Augustine. Her funeral epitaph survived in ancient manuscripts about her life, until in 1945, while digging a hole to plant a football post, two young boys found the original stone epitaph of Saint Monica.

Translated, the tablet’s Latin message titled Saint Monica “Mother of the Virtues.” Today, she is the patron saint of married women, difficult marriages, difficult children, alcoholics, victims of adultery or unfaithfulness, victims of verbal abuse, and conversion of relatives.

Patience in prayer is one of the hardest skills to master in our faith journey; we want God to give us answers and give us answers now! We should look to the witness of patient Saint Monica, who trusted that years and years of prayer, paired with strong, unshakeable virtues, would eventually bring the souls of her husband, her mother-in-law, and even her headstrong son, to be where were all so greatly desire – basking fully in the love of Jesus Christ. 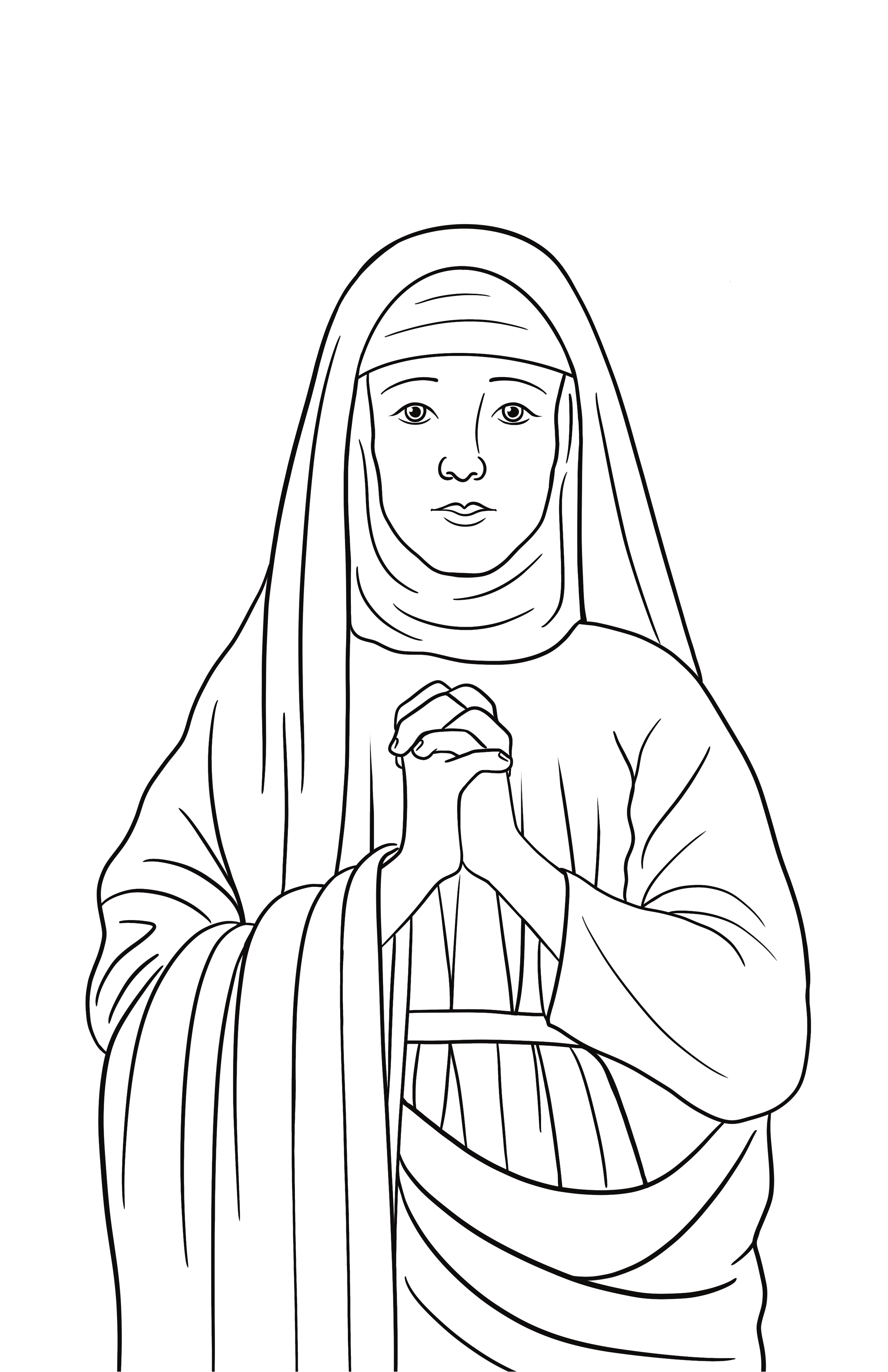 FUN FACT: THE CITY OF SANTA MONICA, CALIFORNIA IS NAMED AFTER SAINT MONICA, AND THERE’S A STATUE OF HER IN PALISADES PARK!