Home > Our Lady of the Angels Chapel  > The Relics > St. Mary Magdalene 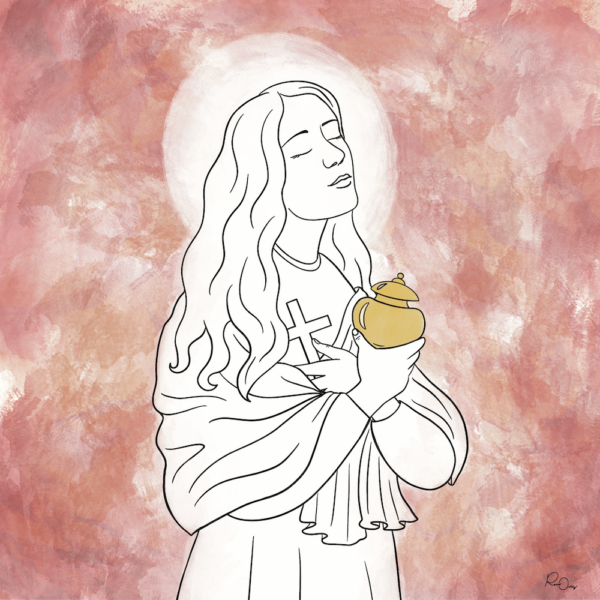 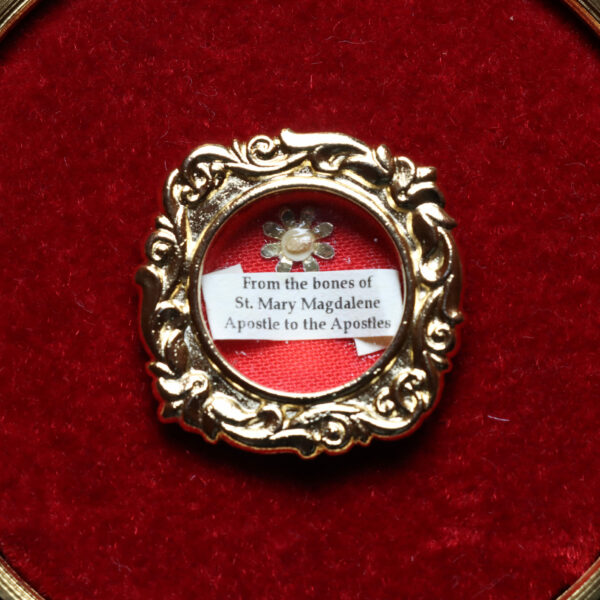 The twelve apostles are some of the most well-known figures in Christianity. Jesus Christ’s closest followers, each of the twelve men were major figures in his life and ministry, playing important roles in sharing the gospel message.

But when the dark hour arrived for the crucifixion of Jesus, only a few brave souls were able to witness the brutal act. And while one of those souls are not counted among the twelve, Saint Mary Magdalene – the “apostle of the apostles” – is one of the most honored women in the Bible and one of the greatest saints today.

Except for Mary, the mother of Jesus, few Biblical women are as renowned as Mary Magdalene. She was the very first person to see the resurrected Christ, she is mentioned more than any other woman in the Gospels, and more than most of the apostles. Despite her clear canonical role as one of Jesus’ most faithful followers, there have also been persistent debates over the centuries regarding her life and background.

The few unchallenged facts regarding the life of Mary Magdalene are scarce. Her epithet reads Magdalene, or more literally translated “the Magdalene”, indicating that she most likely came from Magdala, a small village on the western shore of the Sea of Galilee known as a fishing town. The name Mary was the most common Jewish name for women during her time, which further stokes the confusion distinguishing her in the Gospels.

She does not enter into the Gospel of Mark until the moment of Jesus’ crucifixion, but in Luke’s Gospel, the beginning of chapter 8 (where Jesus is preparing to proclaim the parable of the sower) contains a brief introduction and distinction for this great saint.

“After this, Jesus traveled about from one town and village to another, proclaiming the good news of the kingdom of God. The Twelve were with him, and also some women who had been cured of evil spirits and diseases: Mary (called Magdalene) from whom seven demons had come out; Joanna the wife of Chuza, the manager of Herod’s household; Susanna; and many others. These women were helping to support them out of their own means (Luke 8:1-3).”

The story of Jesus driving seven demons out of Mary is reiterated in the longer ending contained in the second-century addition to the Gospel of Mark (16:9), but it is particularly noteworthy that so little detail is afforded to her exorcism. In the first century, demons were widely believed to be the root cause of any physical illness or psychological affliction. Considering that Biblical accounts tell of not just one, but seven demons being exorcised from Mary, it is likely that Mary Magdalene was suffering greatly from her ailments prior to Jesus intervening, which many believe may have been more of a physical disorder rather than a true demonic presence.

Regardless, Jesus successfully driving out the “seven demons” would have led to a strong devotion to Him, which would explain her refusal to avert her gaze upon Golgotha. Furthermore, the writers of the Gospels regularly employed dramatic descriptions of Jesus casting out demons, with details of the wailing and tearing of garments in nearly every account. However, the lack of detail in Mary Magdalene’s exorcism would suggest that it was either conducted privately or wasn’t particularly dramatic.

The ending of Luke 8: 1-3 also indicates Mary Magdalene was a crucial member of Jesus’ ministry by her financial support. She, along with several other women she associated with, became followers of Jesus and supported Him and His disciples. This is further supported in Mark 15:40, the passage describing the crucifixion of Jesus:

“Some women were watching from a distance. Among them were Mary Magdalene, Mary the mother of James the younger and of Joseph, and Salome. In Galilee these women had followed him and cared for his needs.”

Mary Magdalene is viewed by many Biblical historians to have occupied a similar role among the female followers of Jesus to that of what Peter held among the male apostles. She remained a faithful follower of Christ even unto His death – all four Gospels list her among those watching from a distance His crucifixion, as well as being present at His burial.

But perhaps the most telling event of all regarding the relationship of Jesus and Mary Magdalene was His resurrected appearance before her.

The beginning of John 20 tells of her arriving at the tomb to anoint the body of Jesus with spices (a Jewish custom to honor the dead) only to find the stone rolled away. After alerting Peter and another disciple, they ran to the tomb to confirm the miraculous news and then departed – she found herself standing outside the tomb crying, only to look inside the tomb and see it now occupied by two angels.

When questioned, she shared her grief: “They have taken my Lord away,” she said, “and I don’t know where they have put him.” And it was at this moment, a moment in which Jesus could have selected any follower or disciple, that He chose her to appear to.

When the man she thought to be the gardener asked who she was looking for, her response was firm and direct: “Sir, if you have carried him away, tell me where you have put him, and I will get him.”

It was then her eyes were opened, and she saw the resurrected Lord. One can only imagine the immense joy in her cry of “Rabboni!” which is Aramaic for “teacher”. Jesus gave her clear instructions: “Do not hold on to me, for I have not yet ascended to the Father. Go instead to my brothers and tell them, ‘I am ascending to my Father and your Father, to my God and your God.’”

And she did just that. While most followers of Jesus had likely assumed His story had concluded upon the cross, her excited cry of “I have seen the Lord!” to the disciples marked the beginning of an incredible journey to come.

As for the remainder of her life, there are many religious texts which speculate about her whereabouts. Most agree that she was devoted to sharing the Gospel message after Jesus ascended into heaven, but it’s unclear ultimately where she carried that mission out. One story tells of Mary among a group of early Christians who were forced out to sea without sails or oars by Jews who had persecuted them. The group reportedly landed in southern France, and tradition tells of Mary living the rest of her life as a contemplative in a nearby cave. There are others who speculated that she instead traveled with the apostle John to Ephesus (present day Turkey) and retired there, but very few records exist to prove any of these theories.

A multitude of factors have played into the varying depictions or portrayals of Mary Magdalene over the years– the sheer number of women named “Mary” in the Bible, the variations among the four Gospels, and a select few Biblical stories involving unnamed women which have been connected to Mary via loose assumptions and vague teachings.

Around the year 591, Pope Gregory I gave a homily which identified Mary Magdalene as being the anonymous sinner with perfume in the Gospel of Luke, as well as being the Mary known as the sister of Martha and Lazarus. He also specified her sins for the first time as those of a sexual nature.

Pope Gregory’s interpretation took the seven demons driven from Mary to represent the seven deadly sins, which equated to condemning her of having fallen into sins including those of lust and covetousness. This theory of the three Marys in one spread widely but received much opposition – additionally the image of Mary Magdalene being a repentant sinner or prostitute was not formally accepted by Eastern Orthodox religions, but was still a regular basis for her depiction thanks to Western medieval and Renaissance Christian art.

So regular was this characterization of Mary Magdalene as a reformed prostitute that in 1758, moral reformers opened the first “Magdalen institution” in Whitechapel, London: The Magdalen Hospital for the Reception of Penitent Prostitutes. It was the first of many institutions opened to house and support “fallen women” which was a popular term at the time applied to those involved with work in prostitution or general sexual promiscuity.

There were countless attempts at further divulging Mary Magdalene’s history throughout the centuries, but in 1969, a revision of the General Roman Calendar attempted to make a clear distinction regarding her life, in regard to her celebration on July 22, her feast day: “No change has been made in the title of today’s memorial, but it concerns only Saint Mary Magdalene, to whom Christ appeared after his resurrection. It is not about the sister of Saint Martha, nor about the sinful woman whose sins the Lord forgave (Luke 7:36–50).”

Additionally, regarding the liturgies performed on July 22, it is specifically noted that “it will make mention neither of Mary of Bethany nor of the sinful woman of Luke 7:36–50, but only of Mary Magdalene, the first person to whom Christ appeared after his resurrection.”

On June 10, 2016, Pope Francis made the distinction to raise the level of her liturgical memory on July 22 from memorial to that of a feast, putting her on par with the twelve apostles. Another Pope, Benedict XVI spoke of Mary Magdalene a handful of times, including his Angelus message on July 23, 2006 in which he had this to say of the inspiring saint:

“The story of Mary of Magdala reminds us all of a fundamental truth. A disciple of Christ is one who, in the experience of human weakness, has had the humility to ask for his help, has been healed by him and has set out following closely after him, becoming a witness of the power of his merciful love that is stronger than sin and death.”

When so little is known historically about such an immensely important figure in the Bible, it is easy for a wide variety of imaginative details or loose threads to fill in the blanks. From Pope Gregory, to “The Da Vinci Code” to even the 2018 film “Mary Magdalene” starring Rooney Mara and Joaquin Phoenix (which based its story off a variety of sources regarding Mary’s life, including the Bible, Gnosticism, and more), she is depicted in a variety of ways. But a small number of things we know with near certainty.

Saint Mary Magdalene was in one way or another, a sinner, like us all. She was healed, forgiven by Jesus and followed Him. In His darkest hour, she was there. Though many abandoned Him, she chose to honor Him. And when He returned, she was the one to whom the privilege was given to receive Him.

Let us look to this legendary saint, who witnessed the cornerstone of Christianity in our resurrected Lord, to guide us on the road to sanctity, and to never forget who it is we are looking for. 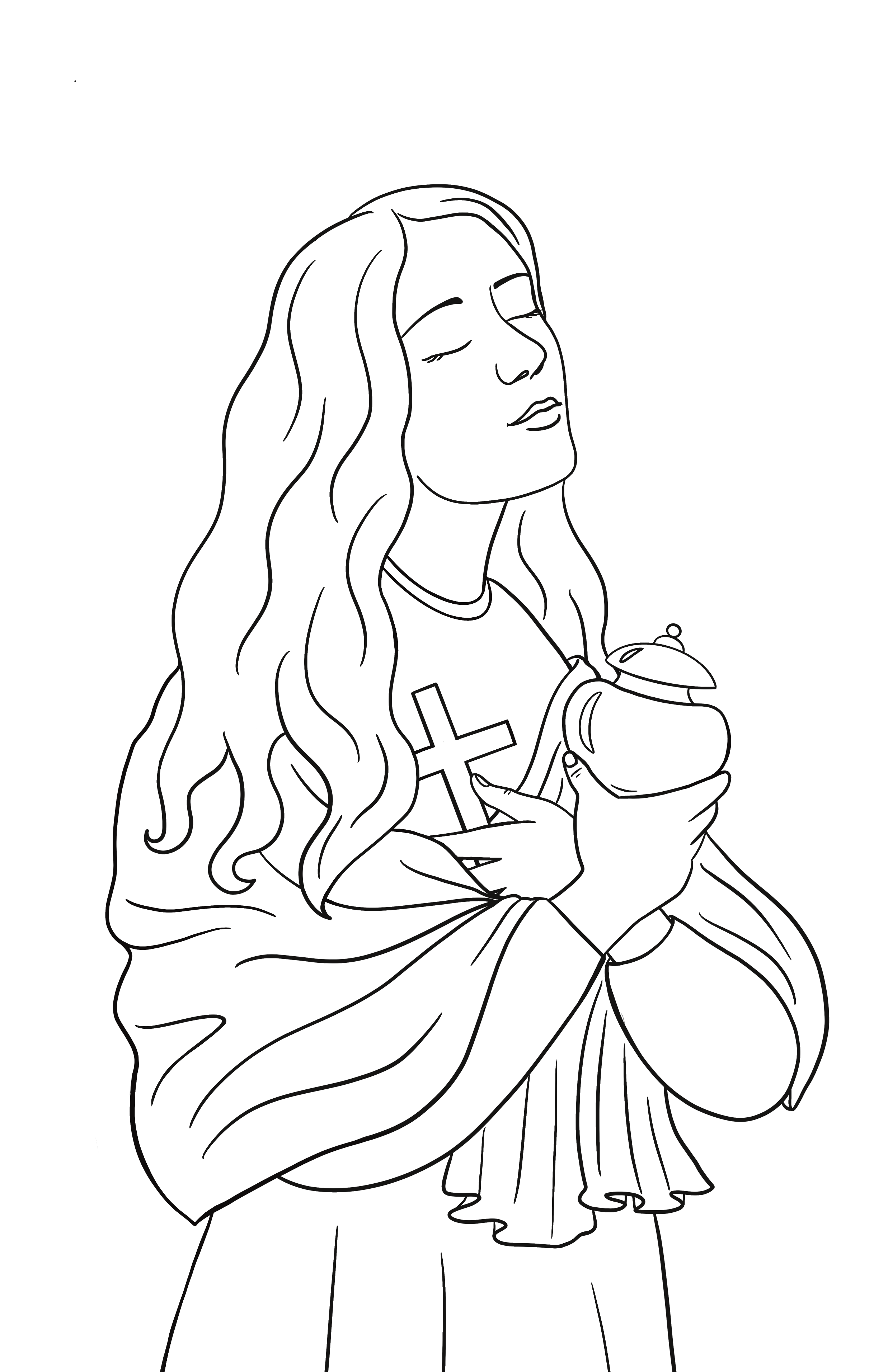 BIRTHPLACE: LIKELY MAGDALA, NEAR THE SEA OF GALILEE

FUN FACT: MANY TRADITIONS POINT TO SAINT MARY MAGDALENE AS PART OF THE REASON WHY WE USE EASTER EGGS AT EASTER TIME!