Home > Our Lady of the Angels Chapel  > The Relics > St. Justin Martyr 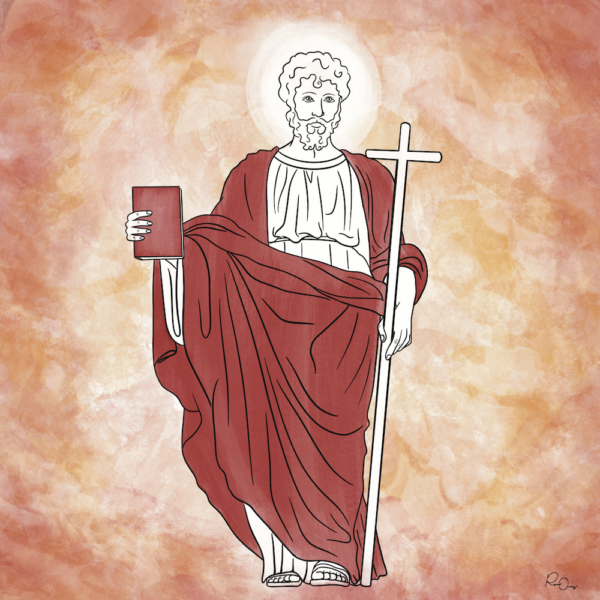 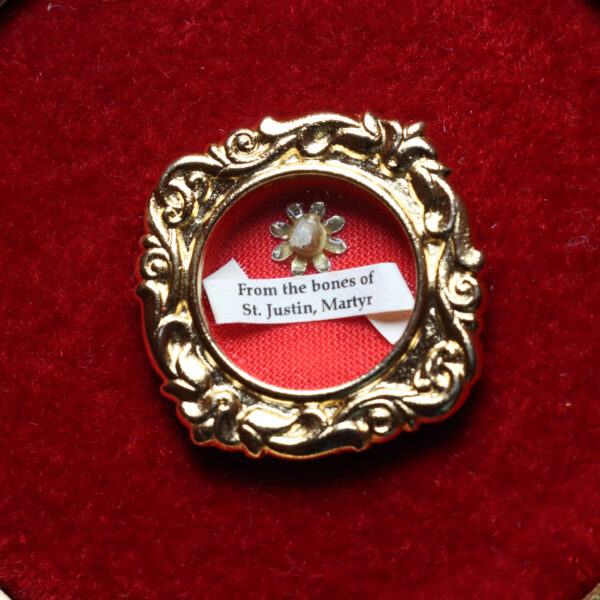 “You can kill us, but you cannot do us any real harm.”

Every human during their time on Earth is searching for something – purpose, fame, fortune, love, etc. For Saint Justin Martyr, his search was for truth, and he found it in the one true God: Jesus Christ.

One of the most important philosophers in the history of the Catholic church, he was the first known writer to quote from the Acts of the Apostles and his deeply profound writings made an indelible impact and contribution to Christian theology.

Born around the year 100 A.D. in Flavia Neapolis, Palestine (the present-day city of Nablus), Justin was born to pagan parents and became extremely well educated to the teachings of Stoicism, Platonism and other pagan philosophies. He developed a profound love for truth, and sought it out through multiple philosophical schools, but none of them quenched his thirst. He pinballed from one teaching to the other, but whether it was a philosopher too eager for his fee or a teacher unable to explain God’s being adequately to the student, he was left unsatisfied, until a chance encounter changed his life.

Justin’s writings depict him crossing paths with an old man walking along the seashore, who engaged in a dialogue about God that kindled a fire in his soul. The old man imparted on Justin the testimony of prophets and their increased reliability over the flawed reasoning of philosophers.

In his second-century Christian apologetic text Dialogue with Trypho, Justin recounts the man telling him “There existed, long before this time, certain men more ancient than all those who are esteemed philosophers, both righteous and beloved by God, who spoke by the Divine Spirit, and foretold events which would take place, and which are now taking place. They are called prophets. These alone both saw and announced the truth to men, neither reverencing nor fearing any man, not influenced by a desire for glory, but speaking those things alone which they saw and which they heard, being filled with the Holy Spirit.”

Justin’s writings make it clear that he admired Christians from afar because of the beauty found in the way their profound morals shaped their lives. While a disciple of Plato, he had been skeptical of the accusations he heard regarding Christians, due to how they were “intrepid in the face of death and of all that men fear.” From what he was witnessing and learning, he felt that it was “impossible that they should be living in evil and in the love of pleasure.”

After talking with the man by the beach, he finally understood the witness of Christians who “preferred truth to life.” The final cementing on the Christianity’s proof of truth for Justin was the witness of martyrdom; plenty of people had died for Jesus Christ, but nobody died for the teachings of Socrates.

Justin soon renounced his former religion, becoming a Christian in the year 132, most likely in the city of Ephesus, located in modern Turkey. He began traveling far and wide, inspired with the passion of his Christian faith, to proclaim his newfound philosophy in hopes of converting educated pagans to the Lord. He spent a decent amount of time in Rome, establishing a school, debating cynics, writing wise apologetical works, and creating a fair share of non-Christian enemies in the process.

Many of his teachings clashed with those of various Roman, Greek and Jewish scholars, and during the reign of Marcus Aurelius in Rome, Justin debated with the cynic Crescens, who would in turn denounce him as seditious to the authorities. Justin was arrested for being a Christian, a faith of which was under heavy persecution at the time by Aurelius, and after he refused to offer a sacrifice to pagan gods, he was tried, found guilty, and condemned to death in the year 165, alongside six companions.

He died by execution, and authentic records of his martyrdom, by beheading, still exist to this day.

Of all Justin’s writings, only a portion survive, but three are held in the highest regard amidst Christian apologetics: his two Apologies, and Dialogue with Tryphon. In the First Apology, Justin vehemently defended his fellow Christians against the accusations of atheism and open hostility towards them from the Roman state. He also dove into the core of his Christian philosophy, which was rooted in the term logos, the Greek word for “intellect” or “word.” Justin explained that logos enables humankind to understand basic truths all around them (time, creation, good & evil, etc.), but that Jesus Christ alone was the divine logos, and the ultimate truth.

His writings went on to continually defend Christianity from Roman attack, provide incredible descriptions of the beauty contained within the sacraments of baptism and the Eucharist, and compared core Christian beliefs with the beliefs of the Greco-Roman religion, to demonstrate the truth and beauty that was weaved throughout Christianity like a beautiful tapestry.

Justin had an incredible knowledge of scripture – many scholars find his writings particularly informative thanks to his understanding of the Gospels of Matthew, Mark, Luke & John. His writings established a solid foundation of salvation history, as well as a principal history of the Catholic church, from his writings regarding the sacraments.

With his ardent defense of the faith, his use of philosophical wisdom, and hunger for undeniable truth, there is much we can learn from Saint Justin Martyr. He was unafraid to learn more, to grow in his faith, and to follow the Truth all the way unto death. 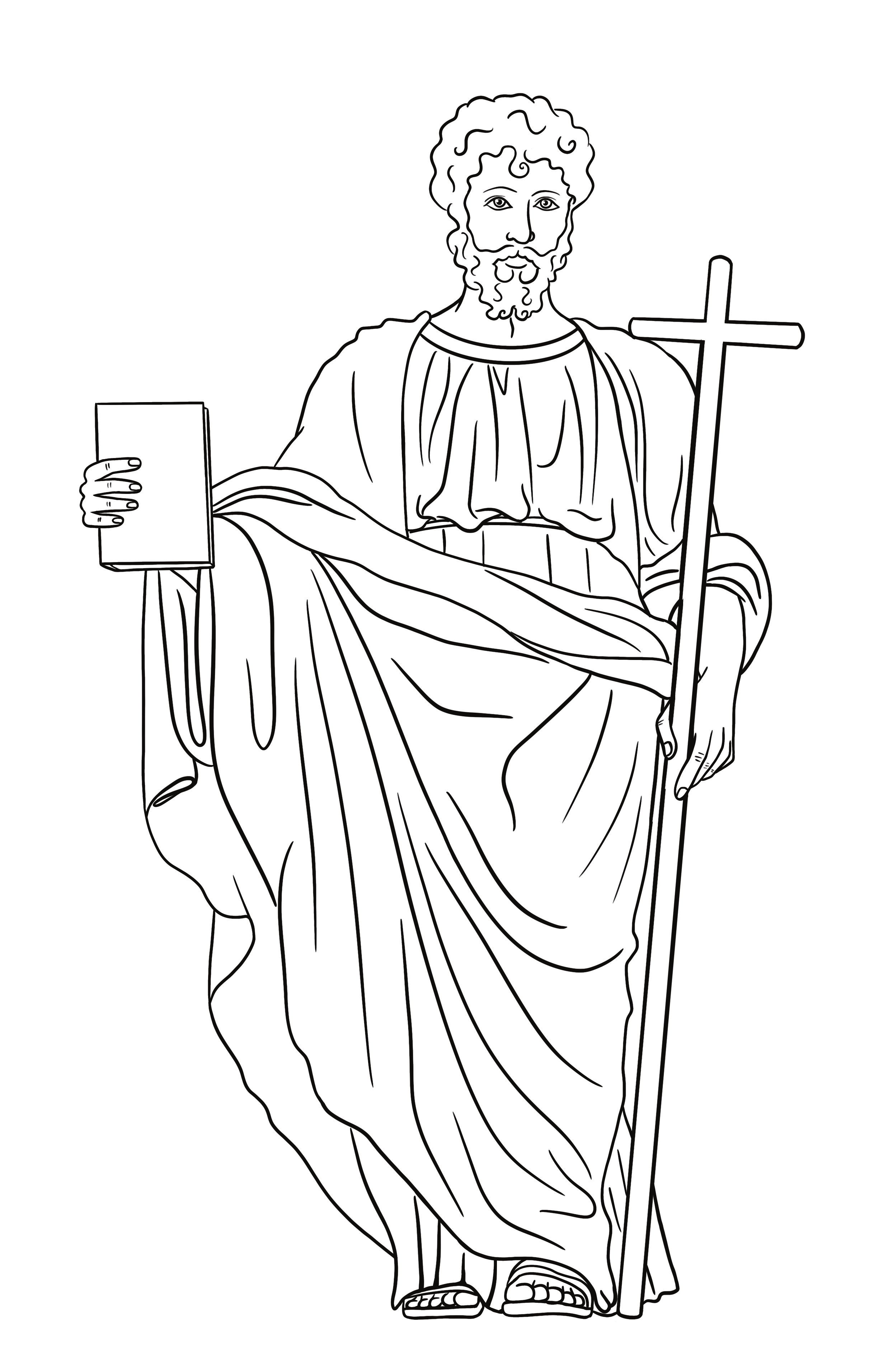 FUN FACT: SAINT JUSTIN MARTYR IS THE FIRST KNOWN WRITER TO QUOTE FROM THE ACTS OF THE APOSTLES.