Home > Our Lady of the Angels Chapel  > The Relics > St. Frances Xavier Cabrini 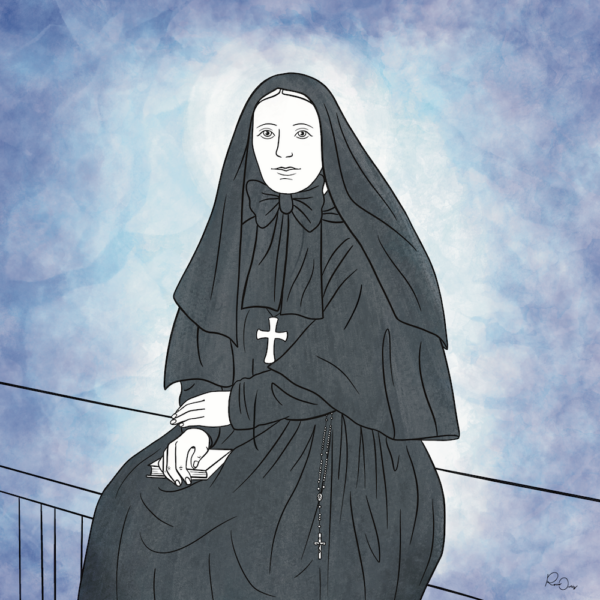 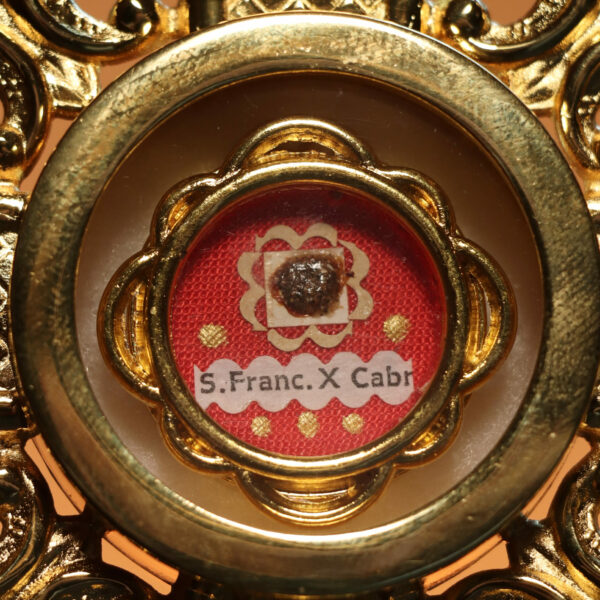 “We must pray without tiring, for the salvation of mankind does not depend upon material success . . . but on Jesus alone.”

Saint Frances Xavier Cabrini, the first United States citizen to be canonized a saint, was a fearless, resourceful and caring missionary soul who followed the will of God to the streets of New York City. Sent on a mission from Pope Leo XIII, she would meet hardship and difficulties at nearly every turn, but undeterred, she changed the world with her zeal for souls.

The youngest of thirteen children, Frances Cabrini was born on July 15, 1850 in S’ant Angelo Lodigiano, a small village near the city of Milan, Italy. She was born two months premature, and she would live the majority of her life in fragile health because of it.

Her parents, Agostino Cabrini and Stella Oldini, were farmers and Frances’ older sister Rosa assumed charge of the new arrival to the family, carrying her on errands around their village, teaching her to sew, and teaching her a few prayers. Their father Agostino enjoyed reading aloud to his children, often gathering them to read from a book of missionary stories, which intrigued young Frances. Her dolls became nuns and when visiting her uncle, a priest who lived nearby, she would make small boats out of paper, drop violet petals into them, and send them down the swift canal running alongside his house, calling them “missionaries” headed to India or China.

Once while preparing to send these “missionaries” off, she fell into the water, nearly drowning, which would spur a deep fear of water that she would carry with her into adulthood.

Inspired with a missionary zeal and intrigued with the future of religious life, she studied arduously at her school, run by the Daughters of the Sacred Heart. She graduated with high honors and a teaching certificate. At 18, she applied for admission to the religious congregation of her teachers, but was turned down from joining the Daughters of the Sacred Heart due to her poor health.

Disappointed but not discouraged, she devoted herself to a life of lay service. Frances would experience the grief of losing both her parents in 1870, and not long after, was offered and accepted a substitute teaching position in a village school about a mile away from home. Her spirit of service grew greatly from this teaching position, and Father Antonio Serrati, the rector of the parish run by the Daughters of the Sacred Heart, had observed her desire to join the order and took notice of her missionary heart.

When Frances attempted to join the religious order again, Fr. Antonio instead tasked her with a different mission: to travel to Cadagono, Italy in order to help restore a disorganized and poorly-run orphanage called the House of Providence. At 24 years old, she journeyed to Cadogno, for what would become a six-year period of training, teaching, and building a community of women who were devoted to a life of charitable work. In September of 1877, she became Mother Cabrini, making her vows at the House of Providence, and putting on her religious habit for the first time. She also added “Xavier” to her name, in honor of St. Francis Xavier.

Frances was also named Mother Superior of the House of Providence, helping train seven young nuns, before the orphanage was abruptly closed in 1880. Now homeless, Frances would soon receive a suggestion from the Bishop of Lodi that would set her on a new, exciting course.

The Bishop of Lodi wished for Frances and her nuns to found a missionary order of women to serve in his diocese. She accepted the opportunity, moving with the nuns into an abandoned Franciscan friary in Cadogno. Almost immediately, they became a hub of activity, receiving orphans, opening a day school, teaching classes in needlework, and doing everything they could with few resources to serve those in their area. At the same time, Mother Cabrini was beginning to draw together a simple rule of life for the institute, choosing St. Francis de Sales and St. Francis Xavier as their patrons. She composed the rule and constitution of their religious institute, designing a simple habit (absent of elaborate linens or headdresses) and they became the Missionary Sisters of the Sacred Heart.

In its first five years, the institute would open seven homes, a free school, and a nursery, with many postulants flocking to Cadogno to join. Mother Cabrini was starting to become well-known in her locality, and her good works caught the attention of the Pope Leo XIII.

In September of 1877, Mother Cabrini traveled to Rome seeking papal approval for her order, which up to this point had just existed on a diocesan level. Frances had her eyes on a global mission, wanting to open a house in Rome, and travel to China. Within two weeks of arriving in Rome, she had made contacts in high places, holding meetings with various Cardinals and supporters. She would be granted the opportunity to establish a free school and kindergarten in Rome, but when speaking with Pope Leo XIII, he encouraged her to take her missionary zeal “not to the East, but to the West.”

At that time, millions of Italians had emigrated to the United States and to South America due to increasing hardships in Italy. They dreamed of bettering themselves and sought new opportunities for their families, but many found only hardships and cruelty. Immigration into the United States hadn’t reached its peak yet, but a steady stream of arrivals, lured by the enticements of a fresh start, poured into the ports with little to no provisions made ready for them. Many Italians were immediately exploited and pulled into exceedingly dangerous jobs of digging, draining and toiling in sweatshops. Clusters of overcrowded, disease-filled slums cropped up in cities, becoming known as “Little Italies.” The majority of Italians found their dreams unmet, lonely and homesick in a new, vast, and dire country.

Enter Mother Cabrini, inspired by the Pope’s redirection, who wrote to Archbishop Corrigan in New York that she and her nuns were coming to aid him. On March 31, 1889, Mother Cabrini and six other sisters arrived in New York, ready to serve the Lord.

The challenges of the city were immediately apparent, when a misunderstanding at the time of their arrival revealed that the building originally intended to be their orphanage was no longer available. The Archbishop suggested that the nuns should return back to Italy, but Mother Cabrini refused. Homeless yet again, the sisters couldn’t afford to stay in a hotel, and were taken to an inexpensive lodging house with beds so dismal and dirty, that they instead spent the night praying together, preparing themselves for the work ahead.

Young and courageous, the nuns emerged the next morning to attend Mass and outline a plan of action with the Archbishop. Almost immediately, a wealthy Italian woman lent her support to the group, contributing money to purchase their first house, and an orphanage was soon taking root in West Park, New York, which is now known as the Saint Cabrini Home.

What followed next was the work of a valiant woman, filled with the love and trust of God, determined to serve him ardently. Mother Cabrini would overcome her childhood fear of water to travel across the Atlantic Ocean time after time, traveling back to Rome to secure more support, embarking for Nicaragua to open a school for girls, stopping in New Orleans to lend support to the plight of Italians in similarly dire situations, and much more.

In 1892, Mother Cabrini opened her first hospital. With a starting capital of $250, the Columbus Hospital opened its doors on Twelfth Street in New York. Doctors worked free-of-charge, and what the nuns lacked in equipment or experience, they made up with their zeal for souls. The hospital grew in reputation, soon securing further financial support, and moving to a larger building on Twentieth Street, where it is still open to this day.

Every year that passed brought more schools, hospitals and orphanages opening around the world. When the Nicaraguan school was forced to close due to a revolutionary overthrow of the government, the sisters moved to Panama and continued to work. Once when invited by an archbishop to travel to Buenos Aires and support the area with her work, she arrived to find that he had died in the time it took her to get there, and the Missionary Sisters were unsure of their welcome. Nonetheless, Mother Cabrini had soon garnered enough support to open a school in the area.

While schools were founded in Paris, England, Spain, Rio de Janeiro and beyond, she also founded the Sacred Heart Villa in New York in 1899, as a training center for novices to her order. This place was as close to a home in the United States as Mother Cabrini would ever have, and there is an avenue not far from it that bears her name today.

She traveled the world vigorously, leaving a wake of care and support to those in need behind her. Even where she didn’t have an established institution, her presence alone led many groups and governments to take constructive steps to remedy any suffering or shortages in their area.

In 1909, at the age of fifty-nine years old, Mother Cabrini took the oath of allegiance to the United States in Seattle. She would reduce her traveling, as her age and health were beginning to draw on her energy, but her prayer, passion and purpose never relented. Eight years after becoming a U.S. citizen, she was in Chicago when she suffered a recurrence of illnesses related to a previous bout with malaria. She died on December 22, 1917, in one of her own hospitals in Chicago. She was 67.

Frances’ body was initially placed at the Saint Cabrini Home in New York, before being exhumed in 1931 as part of her canonization process. Her head is preserved in Rome, one of her arms is located in Chicago at the national shrine, and the rest of her body rests in New York.

Frances Cabrini had a speedy canonization process, getting beatified by Pope Pius XI on November 13, 1938, and canonized by Pope Pius XII on July 7, 1946. She has two miracles attributed to her – restoring the sight of a day-old baby who had been blinded by receiving a 50% silver nitrate solution instead of the normal 1% solution, and healing a terminally ill member of her congregation. The baby whose sight she restored was present at her beatification, and would later become a priest.

A celebration Mass for her canonization filled Soldier Field in Chicago, with tens of thousands of Americans coming together to pray for the intercession of the first American citizen to attain sainthood. In 1950, she was named the patron saint of immigrants.

In 35 years, St. Frances Xavier Cabrini founded 67 institutions dedicated to the care of the poor, the sick, the uneducated, and the abandoned. Seeing the desolation among countless Italian immigrants, she swooped in, restoring their faith and exceeding their needs. The compassion of St. Frances made an indelible impact on countless lives, and she is an incredible witness of a citizen-servant who was unafraid to serve God and neighbor alike. 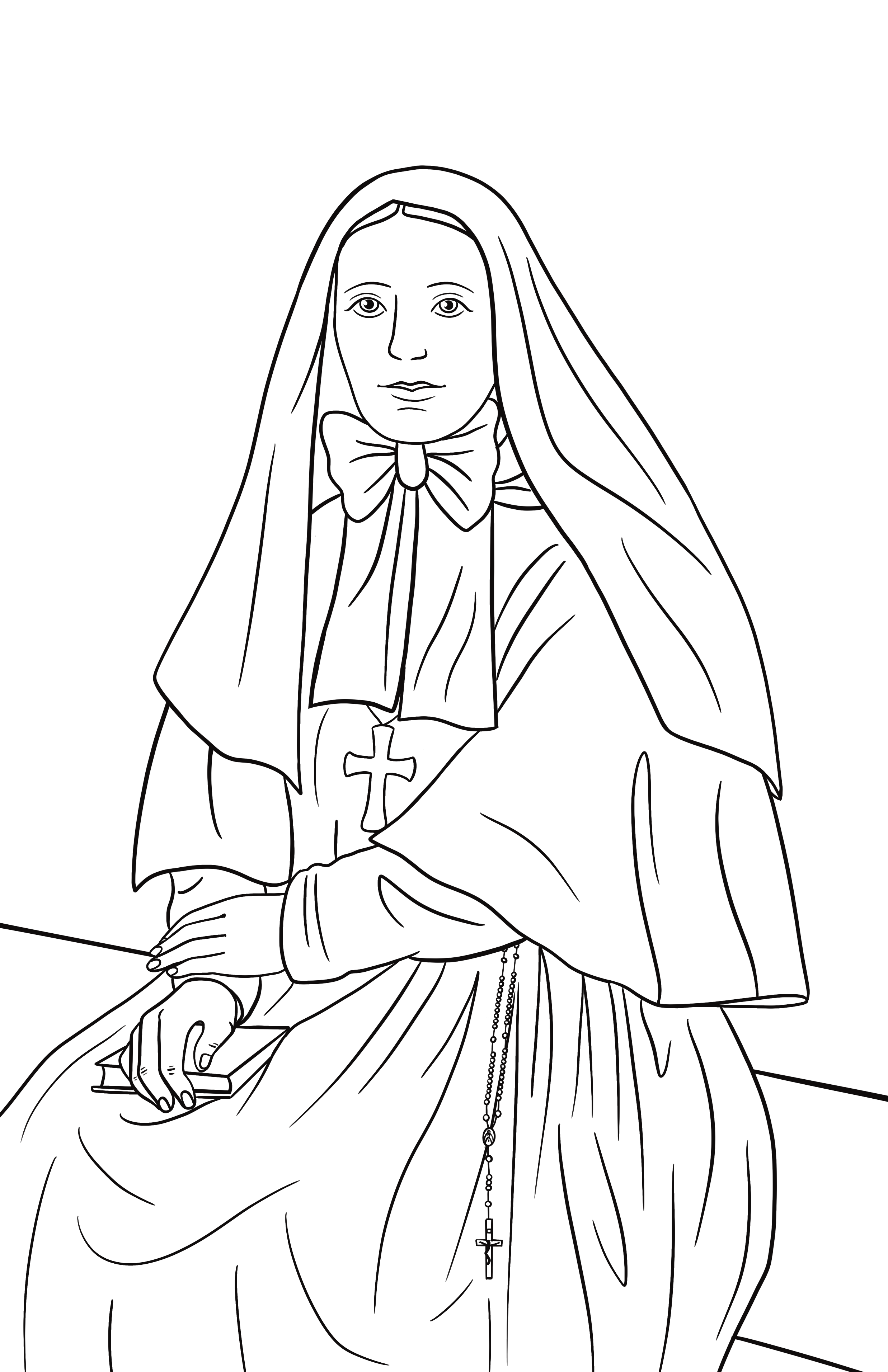 FUN FACT: SAINT FRANCES WAS INDUCTED INTO THE NATIONAL WOMEN’S HALL OF FAME IN 1996! WOMEN HONORED ON THIS LIST ARE RECOGNIZED FOR MAKING CONTRIBUTIONS THAT ARE OF “NATIONAL OR GLOBAL IMPORTANCE AND OF ENDURING VALUE.”