Home > Our Lady of the Angels Chapel  > The Relics > St. Elizabeth Ann Seton 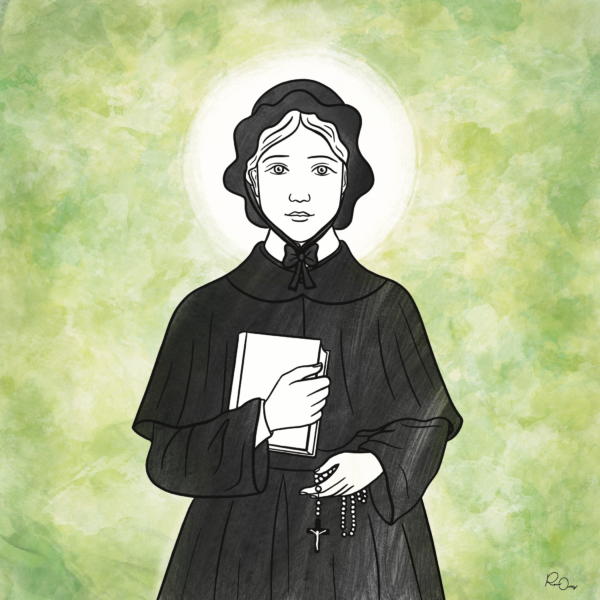 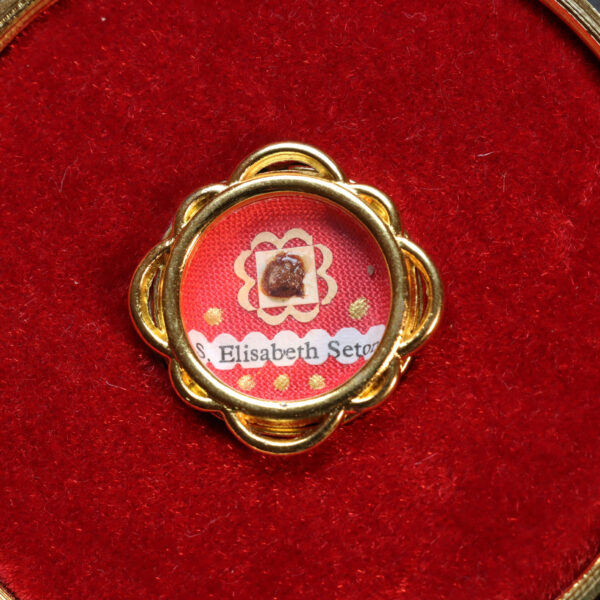 “Live simply, so that all may simply live.”

Saint Elizabeth Ann Seton, a pillar in the foundation of the American Catholic Church, led a life that was not far removed from yours or mine. She didn’t have any heavenly visions, she didn’t levitate when she prayed, nor did she preach to the far ends of the Earth. Instead, she focused on two important and accessible devotions that would change her life and change the world: true abandonment to the will of God, and a passionate love for the Blessed Sacrament.

Elizabeth Ann Bayley was born in New York City on August 28, 1774. A daughter of the American revolution, she was born into a wealthy Episcopalian family just two years before the Declaration of Independence. Her father was one of the first health officials in New York City, and she enjoyed the prominence of growing up in the upper class of New York society.

Her mother, Catherine Charlton Bayley, would pass away in 1777, when Elizabeth was only three years old, and her baby sister died the following year. This early experience of sorrow and suffering led her to grow deeply attached to her father. Raised a staunch Episcopalian, she learned from him the value of prayer at a young age, and the Scriptures became a mainstay for young Elizabeth, who quickly became a prolific reader and would turn to the Bible as a source of instruction, support, and comfort.

By the age of 19, Elizabeth was a bright, beautiful young woman, who caught the eye of William Magee Seton, a hard-working businessman in the import trade industry. The two were married on January 25, 1794 and they moved into an upscale house on Wall Street. They enjoyed a straightforward life, with William busy at his family’s shipping business, and Elizabeth raising their five children. The family was involved at the Trinity Episcopal Church, and Elizabeth started volunteering in the social ministry, caring for the sick and dying around New York City, eventually becoming a charter member of The Society for the Relief of Poor Widows with Small Children, founded in 1797.

This time of happiness and peace in Elizabeth’s life would come to be short-lived however, as tragedy would soon strike her family yet again.

Her husband’s father would pass away in the late 1700’s, leaving the young couple in charge of the importing business, as well as taking in William’s large extended family of half brothers and sisters. The Seton family fortunes dwindled due to the volatile economic climate at the time, and when a dispute between the United States and the French Republic led to chaos amidst the shipping industry, the family business sank and the Seton’s were penniless.

Tormented by the crushing weight and worry of debt, William’s health soon began to decline as well. He had suffered from tuberculosis for most of their married life, and now the stresses of life had worsened his condition. Elizabeth and her children would briefly move in with her father, who continued to work as a health officer for the Port of New York all the way up until his death in the early 1800’s – another victim of the yellow fever epidemic.

At this point, Elizabeth had grieved more than she could have ever expected at such a young age. In the midst of all the loss and suffering, she more and more turned to her spiritual life as a source of inspiration, accepting the hardships as they came, and surrendering to the will of God.

She wrote a letter in May of 1802 that her soul was “sensibly convinced of an entire surrender of itself and all its faculties to God.” Furthermore, amidst the troubles she faced, she wrote, “Troubles always create a great exertion of my mind, and give it a force to which at other times it is incapable… I think the greatest happiness of this life is to be released from the cares of what is called the world.”

In 1803, a doctor suggested a trip to Italy in hopes the warmer climate would bolster William’s health. Elizabeth, along with Anna Maria, their eldest daughter, set sail for Italy to visit their friends, the Felicchi family. In order to pay for the voyage, Elizabeth sold the last remaining possessions she had in New York – silver, vases, pictures, and anything of value.

When the family arrived in the port of Leghorn on November 19th their plans were abruptly derailed, as they were immediately placed in quarantine for a month as authorities were concerned about the transmission of yellow fever from New York. The three were placed in a stone tower located outside the city for a grueling month, with Elizabeth tending to her fading husband, entertaining Anna Maria with games and stories, and holding family prayer services to pass the time.

The three were released from the tower on December 19th. William would pass away only eight days later, dying on December 27, 1803.

Widowed and despairing, Elizabeth and her daughter were received by the Filicchi family, friends and business partners of her late husband. While waiting to return to America, Elizabeth began to attend the churches of her Italian friends, and she was captivated by the Catholic belief in the real presence of Jesus in the Blessed Sacrament. Impressed by her kindness, patience, and newly-developed interest in Catholicism, her Italian friends guided her in Catholic instruction. While she struggled with indecision about converting, she was riveted by the true presence, and eventually the truth was too great to ignore.

She returned to New York City, asked the Blessed Virgin Mary to guide her to the truth, and on March 14, 1805, she entered the Roman Catholic Church.

Many of her friends and family rejected her upon her conversion, and she pondered her next move. Details vary regarding the next stage of Elizabeth’s life, but a few key events occurred.

Elizabeth met a visiting priest, the Abbé Louis William Valentine Dubourg, SS, a member of the French community of Sulpician Fathers and president of St. Mary’s College in Baltimore. Dubourg was in the process of establishing the first Catholic seminary in the United States, and saw Elizabeth’s need, as well as a spark. He suggested she start a school in order to support her family.

Around 1808, Elizabeth left New York and traveled to Emmitsburg, Maryland in order to start a school, which would become the Saint Joseph’s Academy and Free School, the first free Catholic school in America. She was joined in Maryland by her daughters, her sisters-in-law (Cecelia Seton, one of her sisters-in-law, had also became a Roman Catholic), and a handful of young women who also saw Elizabeth’s spark, and desired to follow her. The plans for a Sisterhood were fully underway.

In March of 1809, Elizabeth Seton pronounced her vows of chastity, poverty, and obedience before Bishop John Carroll of Baltimore. From that moment on, she was known as Mother Seton, and given some property in Emmitsburg, for which she used to found the Sisters of Charity of St. Joseph’s, the first community for religious women in the United States. By 1811, the women had received the ecclesiastical authority needed to become an official religious order, and Mother Seton adopted the rules of the Daughters of Charity, which had been founded in France by St. Vincent de Paul. Buildings sprung up quickly in a flurry of activity, in order to accommodate the sisters, create a novitiate program, found a boarding school, an orphan asylum, and much more.

The remainder of Mother Seton’s life was spent leading and developing the congregation. Two of her daughters passed away from tuberculosis in 1812 and 1816, and towards the end of the decade, she too was growing weak and subject to poor health. She suffered greatly from the pain of tuberculosis over the course of her last three years of life, but felt peace in the knowledge that God was getting ready to call her home. On January 4, 1821, she began the prayers of the dying herself, and passed away later that night. She was 46 years old.

Elizabeth Ann Seton was beatified by Pope John XXIII on December 18, 1959. Three miracles were attributed to her in the 1900’s, including the miraculous recovery of Carl E. Kalin, who after being diagnosed with meningitis of the brain in 1963, was comatose and given only a few hours left to live by his doctors. The New York chapter of the Sisters of Charity visited Kalin, and placed on him a relic of Seton, a piece of her bone, and prayed for her intercession. He woke a few hours later, healed completely.

Elizabeth Ann Seton was officially canonized a saint on September 14, 1975, by Pope Paul VI. She became the first native-born saint of the United States of America.

Saint Elizabeth Ann Seton led a quintessential life to be the charter saint for our great country. While seemingly ordinary in nature, she displayed an extraordinary ability to grow in faith and hope because of trial, not in spite of it. With her compassion, desire to help others, and attachment to the truth of the Catholic faith, she resigned herself to the will of the Lord, and in doing so, planted seeds of immense importance in our country regarding Catholic education and religious orders that we still see blooming today. 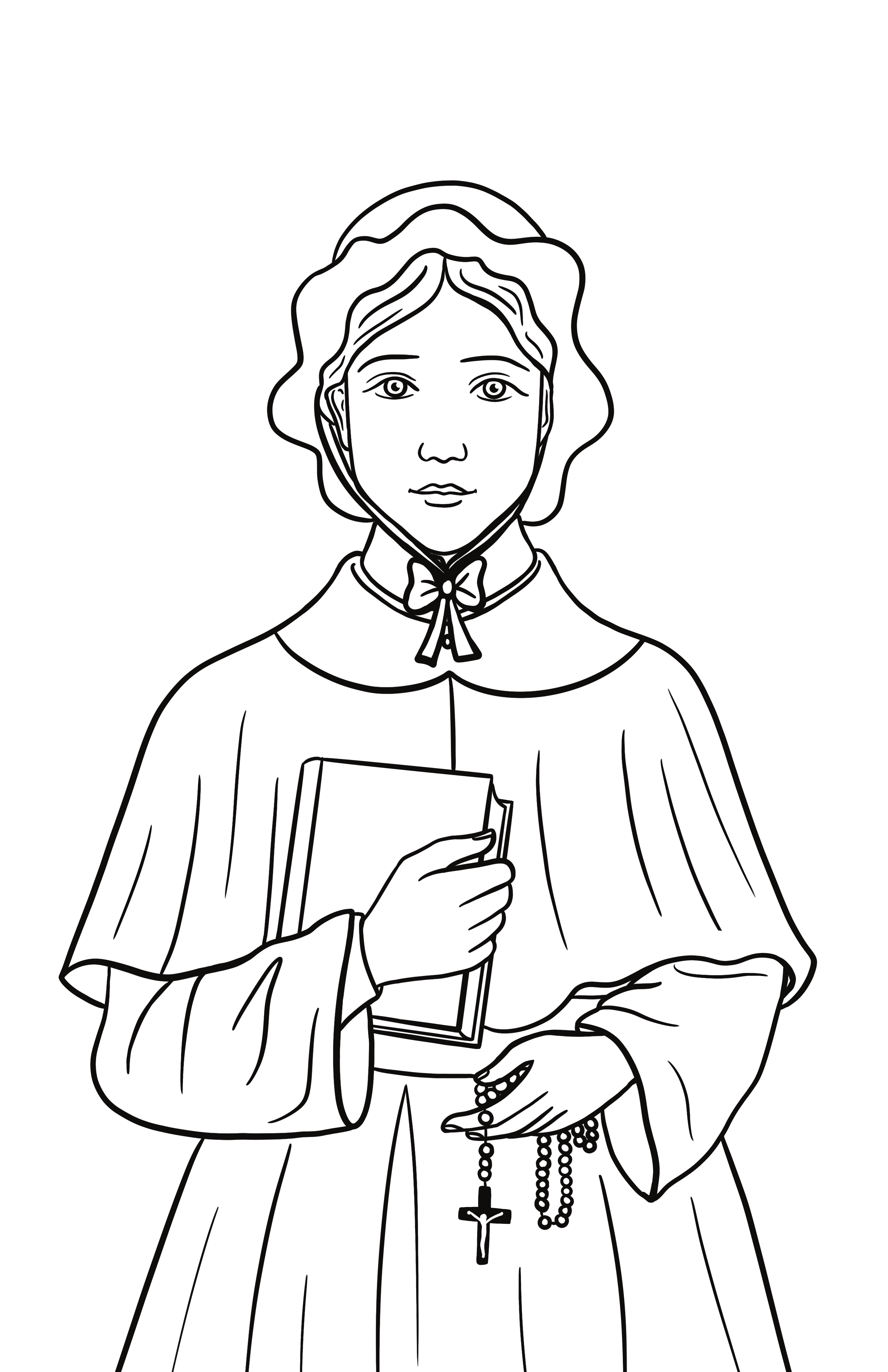 FUN FACT: ELIZABETH ANN SETON WANTED HER BED PLACED IN THE CORNER AND THE PICTURE OF JESUS IN THE BOTTOM RIGHT CORNER HUNG ACROSS FROM HER BED BECAUSE SHE WANTED TO SEE HIM AS SOON AS SHE WOKE UP EACH MORNING.