Home > Our Lady of the Angels Chapel  > The Relics > St. Anthony of the Desert

St. Anthony of the Desert 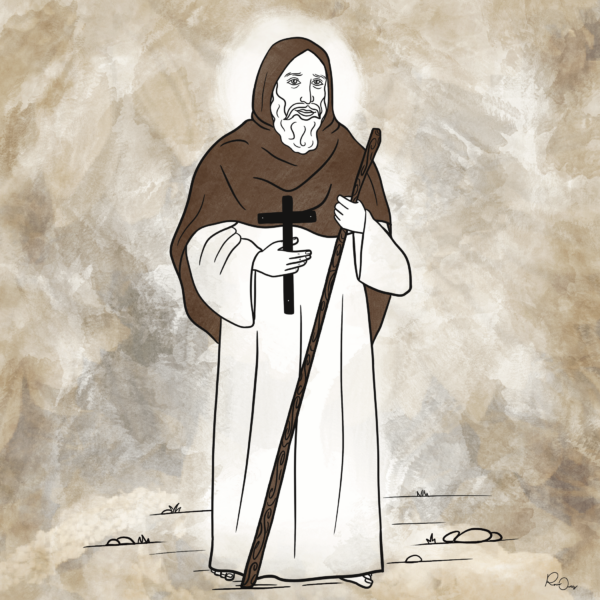 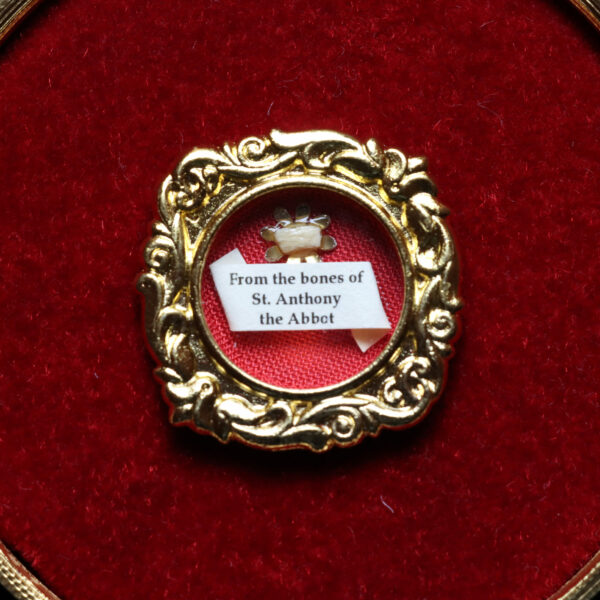 Saint Anthony of the Desert

To say that God turns away from the sinful
is like saying that the sun hides from the blind.”

About Saint Anthony of the Desert

Saint Anthony of the Desert went by many names (St. Anthony of Egypt, St. Anthony the Great, St. Anthony Abbot, and more) but had a singular purpose – become a “lover of God” by resisting the Devil and yielding to Christ. He is a mysterious figure, with nearly everything we know about him coming from a biography written by Saint Athanasius titled “The Life of Saint Anthony the Great.” But what we do know about him, is inspiring in our current day and age.

Anthony was born around 250 A.D. in the village of Coma, located in Lower Egypt to an extremely wealthy family. His parents owned three hundred acres of land, which Anthony inherited around the age of 20 when his parents died, leaving him with vast wealth and the care of his unmarried sister.

One day while attending Mass though, a reading from the Gospel of Matthew changed everything for the future Father of All Monks.

“If you want to be perfect, go, sell what you have and give to the poor, and you will have treasures in heaven.” – Matthew 19:21

While most would balk at the prospect of living out those words to their fullest, Anthony decided to do just that around the year 285: he gave away some of the inherited land to his neighbors, sold the remaining property, and donated all of the funds to the poor. Placing his sister in the care of a group of Christian virgins, he left the city and entered the desert.

Anthony was not the first monk or ascetic hermit, but he was notable for being one of the first to truly cut himself off from civilization. While most monastics chose to practice their lifestyle on the outskirts of cities, Anthony decided to head into the desert region called the Nitra, which was about 95 km west of Alexandria and filled with some of the most rugged terrain that could be found.

According to Athanasius’ biography, Anthony remained in this area for 15 years, practicing a strict ascetic diet of only bread, salt and water, eating at most only once a day. He took up strenuous spiritual exercises, such as staying up all night, choosing sleepless nights of prayer over a restful night of sleep. He had discovered, as written in his biography, that “the mind of the soul is strong when the pleasures of the body are weak.”

Trial would soon arrive at Anthony’s doorstep, as the devil perceived the strength of this ascetic monk. Anthony, who had walled himself into a ruin in order to devote himself fully and perfectly to the Lord, was afflicted with boredom, laziness and even the phantoms of women as the devil attempted to break his focus. Anthony combatted these afflictions with the power of prayer, which would eventually form a theme for future Christian art.

Saint Anthony being assailed by demons became a popular subject in the history of art and literature in the 15th Century. The earliest depiction of him being attacked by demons can be traced to a wall painting in the atrium of Santa Maria Antiqua, a Catholic Church in Italy, from the 10th Century. Perhaps the most famous depiction was an engraving by Martin Schongauer titled “The Temptation of St. Anthony”, which Michelangelo would later use to paint one of his earliest known paintings, “The Torment of Saint Anthony.”

The calmness of Saint Anthony depicted in the artwork is hard to believe when reading the torments he endured, as recounted by Athanasius. The demons would assault him furiously, both physically and spiritually, but Anthony endured the attacks.

Despite being beaten to the point of unconsciousness, phantoms appearing in the form of horrid wild beasts, and repeated attacks, he persevered.

When he would see the wolves, lions, snakes and scorpions gathering in an attempt to attack, he would laugh at them scornfully and say, “If any of you have any authority over me, only one would have been sufficient to fight me.”

At the age of 35, he wished to retreat to absolute solitude and relocated to an abandoned Roman fort for another 20 years of ardent prayer. Food was thrown to him over the wall, and he would not allow anyone to enter, but word of his devotion to the Lord spread, and gradually a number of would-be disciples would come to the wall to listen to his advice.

As the number of followers grew to the nearby caves and huts around the mountain, many begged Anthony to come out and be a guide for those wishing to imitate his spiritual life. Finally, around the year 305, Anthony emerged from his retreat. By this time, after decades of solitude, most expected him to have wasted away physically or been driven insane mentally, but who would emerge but a perfectly healthy and serene Anthony of the Desert, clothed in sackcloth and sheepskin but rippling with muscle.

Rejuvenated, he continued his mission to serve the Lord, even as his legend grew. He would soon found two monasteries for the great body of monks which had formed, and he wrote a rule of life in order to help guide them in the path of ascetism. These were reportedly the first monasteries ever founded, which led to the namesake “Father of All Monks”, despite the fact Anthony himself was not in fact, the first monk to exist.

Anthony is noted for not allowing the attention or number of followers distract him from remaining solely focused on the Lord, both in his own personal life, and in the monasteries he was founding. It is written he had a disdain for “stately buildings and well-laden tables”, so all of his efforts were rooted in a focus on Christ alone.

After his time guiding those seeking to practice self-denial and the hermetic life, he focused his efforts on aiding the Church amidst the persecution of Egyptian Christians in the early 300’s. Word had spread to Anthony of the severe attacks by the Roman Emperor Diocletian, in which churches were razed, scriptures burned, and Christians martyred. He and several monks traveled to Alexandria, where they ministered to the persecuted. The Governor of Alexandria is reported to have ordered Anthony not to show up in the city and continue to comfort those imprisoned, but Anthony, in hopes that he would be tortured and martyred, refused. He was 60 years old at the time, and fearlessly exposing himself to danger in hopes of being an ultimate witness to the faith.

He spent the majority of his remaining years returning to solitude in order to pray, as well as share teachings with those who traveled to hear him. Occasionally, he would grow tired of visitors keeping him from his worship, so he eventually went further into the Eastern Desert of Egypt, finding a spring of water and palm trees. He created an inner monastery there, where he would often retreat to following trips to the desert to visit the brethren of monks. On the spot where he settled amid the palm trees now stands the Monastery of Saint Anthony the Great.

He traveled out of his desert solitude only one additional time, around the year 338 when the Arian heresy began spreading in Egypt. The former deacon Arius began swaying many Egyptian Christians with his teachings about how Jesus was not equal with God, and the leader of the church in Alexandria, Athanasius himself, called upon Anthony to join him in a campaign to champion the truth to the people of Egypt. The future saint provided an eloquent defense of the belief as Jesus being true God and true Man, which led to the eventual elimination of Arianism.

Anthony would live to be over 100 years old, but still miraculously maintain the appearance of youth. Eventually, Anthony felt that the day of his departure was nearing. He commanded his disciples with strict instructions to give away his possessions (which consisted of a staff and two sheepskin cloaks) and to bury his body in an unmarked, secret grave, lest his body become an object of veneration.

Saint Anthony was canonized Pre-Congregation and left no physical writings behind. A handful of his words are included in the Apophthegmata, a collection of sayings attributed to the early desert fathers and mothers, but he most likely only spoke his native language of Coptic, and almost certainly was illiterate.

But through the life of Saint Anthony of the Desert, we discover a great, divine paradox. He hardly ate, yet remained in perfect health. He grew extremely old, yet retained the appearance of youth. He lived in extreme isolation, yet grew agonizingly popular. He possessed so little, yet continually gave so much.

Saint Anthony, devoted to the Lord, persevering against afflictions, and emboldened in faith, was aware of his shortcomings, but rooted himself in what he knew to be his ultimate strength. When two Greek philosophers traveled to speak with Anthony, he questioned why they “wished to meet with a fool.” They replied that they viewed him as no fool, but wise and prudent. In response, Anthony said: “If you think me prudent, become as I am, for we ought to imitate what is good. And if I had come to you, I should have imitated you; but if you to me, become as I am, for I am a Christian.”

While those philosophers departed in silence, having no desire to be converted, may we have our hearts and lives converted by Saint Anthony the Great. 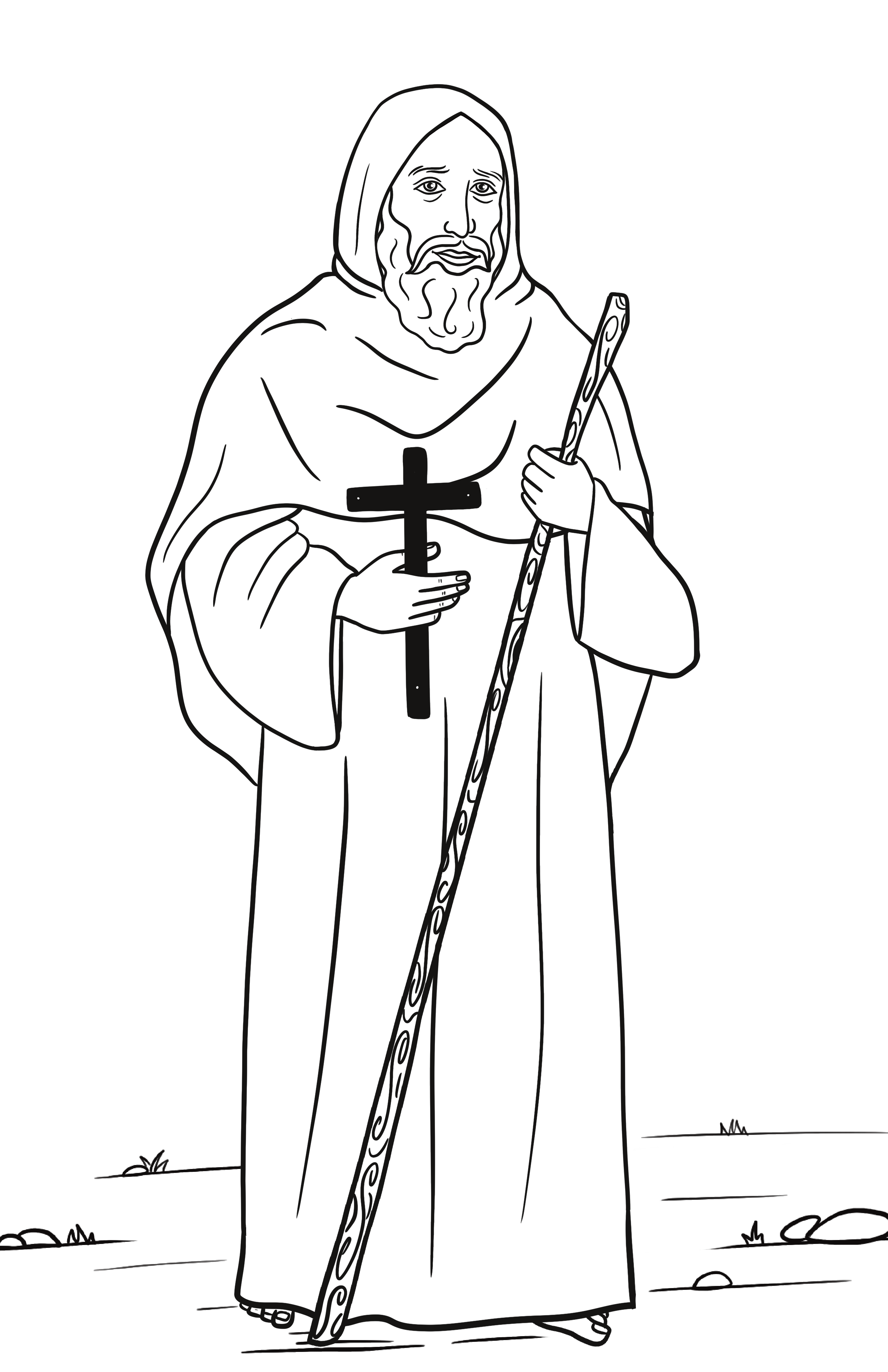 FUN FACT: AFTER ONE PARTICULAR DIFFICULT STRUGGLE AGAINST DEMONS, HE SAW A LIGHT APPEARING IN THE TOMB HE LIVED IN. KNOWING IT WAS GOD, ANTHONY CALLED OUT, “WHERE WERE YOU WHEN I NEEDED YOU?” GOD ANSWERED, “I WAS HERE. I WAS WATCHING YOUR STRUGGLE. BECAUSE YOU DIDN’T GIVE IN, I WILL STAY WITH YOU AND PROTECT YOU FOREVER.”